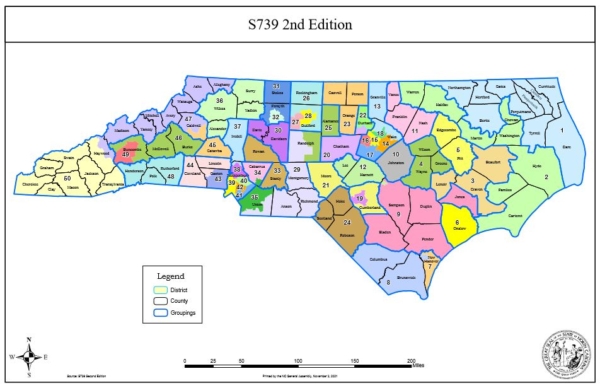 In the complaint, Common Cause is seeking to renew its earlier challenges from the state’s first redistricting lawsuit, NC NAACP v. Berger, which was filed before final maps were passed and alleged that the North Carolina Legislature’s process for drawing state legislative and Congressional voting maps ignored long-standing precedent and resulted in extreme partisan gerrymanders in violation of the North Carolina State Constitution. The motion to intervene now challenges the Legislature’s maps themselves, alleging that state legislators crafted illegal partisan gerrymanders with devastating consequences for Black voters and their ability to elect the candidates of their choice.

“We believe the Legislature’s redistricting process not only created an unfair partisan advantage, but resulted in maps that decimate representation for our state’s Black communities,” said Hilary Harris Klein, Voting Rights Counsel with SCSJ. “We look forward to making our case to the three-judge panel and ensuring all voices are heard in our collective fight for fair, equitable, and constitutional maps in North Carolina.”

“Throughout this year’s redistricting process, we and residents across the state called on lawmakers to follow the law and put the people of North Carolina above partisan politics. Instead, politicians in the legislature brazenly ignored the law, crafting extreme gerrymanders for their own power at the expense of free and fair elections,” said Bob Phillips, Executive Director of Common Cause NC. “Our state’s voting districts don’t belong to politicians, they belong to the people. We can’t allow our state to suffer for yet another decade under illegal maps. We must stand up and demand fair voting districts that follow the constitution, are free from gerrymandering and respect every voter’s right to have a voice in choosing their representatives. We are confident that the people of North Carolina will prevail.”

On December 8, the North Carolina Supreme Court ordered a trial for parties involved in League of Conservation Voters v. Hall and delayed the state’s primary elections from March 8, 2022 to May 17, 2022. The state Supreme Court has ordered the three-judge panel to provide a decision no later than January 11, 2022.