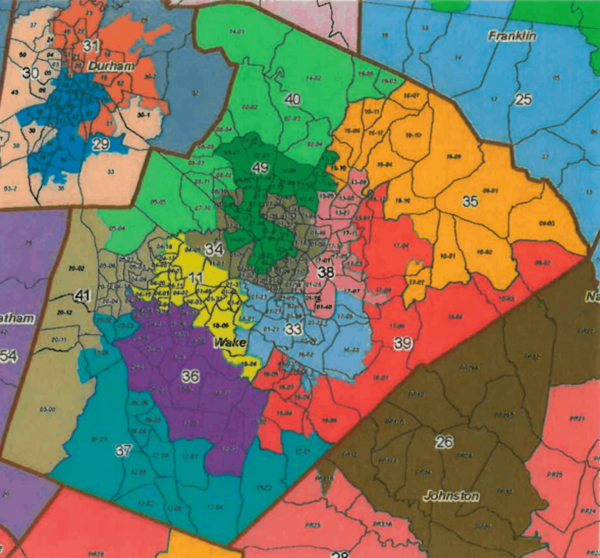 RALEIGH, N.C. — The Southern Coalition for Social Justice filed a redistricting challenge in Wake County Superior Court today arguing that the 2017 changes to four Wake County State House Districts violate the state constitution’s prohibition against mid-decade redistricting; asking the court to prevent the illegally altered Wake County districts in the legislature’s 2017 plan from going into effect; and asking the court to ensure that any remedial plans apply the lines originally drawn for House Districts 36, 37, 40, and 41, contained in the 2011 adopted map, for the upcoming 2018 elections.
The lawsuit was filed on behalf of North Carolina NAACP, the League of Women Voters of North Carolina, Democracy North Carolina, North Carolina A. Philip Randolph Institute, and four individual plaintiff-voters from Wake County.
The focal point of the lawsuit is the legislature’s altering of state House District lines in Wake County when it engaged in a court-ordered redistricting in 2017 to cure two racially gerrymandered districts in the county.
When lawmakers used this opportunity to change the lines for House Districts 36, 37, 40, and 41(none of which were named in the court order), they went beyond what the federal court directed and altered the lines of districts that did not need to be redrawn to remedy the racial gerrymandering. Doing so violated the mid-decade redistricting prohibition found in Article II, § 5 of the North Carolina Constitution. (See http://bit.ly/NCarolinaConstitution, p. 6).
The complaint asks that the four state House Districts in Wake County be returned to their 2011 boundaries in time for 2018 state legislative elections.
The lawsuit was filed nine days after a three-judge panel in the same court decreed that the legislature’s handling of Wake County’s districts should be addressed in a new lawsuit.
Allison Riggs, senior voting rights attorney for the Southern Coalition for Social Justice and lead attorney in the case, issued the following statement after the lawsuit was filed:
“Voters in North Carolina have a state constitutional right to have their legislative districts changed only once a decade. This is an important protection in state law–one that many states don’t have–and its clear purpose is to prevent the ills of gerrymandering and political gamesmanship present here. When tasked with fixing racially gerrymandered districts in 2017, the legislature made no secret of using politically-motivated and illegal changes throughout the county, violating the North Carolina Constitution in the process. Swapping one constitutional violation for another is not acceptable, and we expect the state courts to vigorously protect the state constitutional rights of our clients.”
Janet Hoy, co-President of the League of Women Voters of North Carolina, offered the following statement about the challenge:
“North Carolinians have not been able to vote in constitutional state legislative districts this decade. Lawmakers have dodged their obligations to enact fair districts time and time again. That will not deter us from continuing to push fair districts for voters that comply with the state and federal constitutions.”
Marian Lewin, President of the League of Women Voters of Wake County, issued the following statement after the lawsuit was filed:
“It’s a shame that lawsuits like this are necessary. We shouldn’t have to go to courts to have fair districts. But until lawmakers listen to the voters and pass redistricting plans that don’t discriminate against voters or violate the law, we are going to need strong women – like the individual plaintiffs from Wake County in this case – to continue to stand up and demand fair voting districts.”
A PDF of the lawsuit can be found at http://bit.ly/NCNAACPvLewisComplaint
A PDF of the Motion for Preliminary Injunction can be found at http://bit.ly/NCNAACPvLewisPI