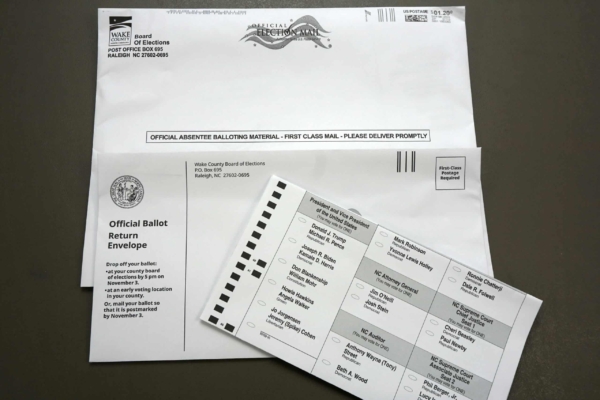 Durham, N.C. — In a 5-3 decision, the United States Supreme Court has upheld a lower court ruling that allows North Carolina voters who make an error on their mail-in ballot to receive notice of the mistake and have an opportunity to fix it, as well as extending the deadline for receipt of absentee ballots. This critical ruling will help ensure potentially thousands of ballots are counted in this year’s critical General Election.

Justice Amy Coney Barrett did not participate in the case.

The Supreme Court upheld a ruling initially issued on Oct. 14 in the U.S. District Court for the Middle District of North Carolina on three cases related to the processing of mail-in absentee ballots. Under the rulings, voters who cast their ballots by mail will be able to correct the following errors on the ballot envelope without having their ballot spoiled and starting anew:

Ballot envelopes missing a witness signature will still be spoiled (not counted), although voters will receive notice and be able to cast a new ballot. While mail-in ballots must be postmarked by Nov. 3, the deadline for county boards of elections to receive them has been extended to Nov. 12, a decision that was also upheld by the U.S. Supreme Court after being challenged in lower courts.

This ruling ends a months-long legal battle over how North Carolina would handle voting during a pandemic.

Late this summer, a separate lawsuit with many of the same claims as Democracy North Carolina v. North Carolina State Board of Elections was filed in state court. In its settlement of that suit in late September, the NCSBOE issued additional guidance on the cure process, including extending the deadline for receiving mail-in ballots.

A few days later, on Sept. 26, two lawsuits were filed in the U.S. District Court for the Eastern District of North Carolina — Wise v. Circosta and Moore v. Circosta — challenging the new cure process issued by the NCSBOE. On Oct. 14, Osteen upheld all the cure process, with the sole exception of the ability to cure ballots that were missing a witness signature, as well as kept in place the extended deadline for mail-in ballots to be received.

“With under a week until Election Day, we are glad that North Carolina voters who have decided to vote by mail now have the assurance that their votes will be counted as long as they are received by Nov. 12,” said Allison Riggs, Chief Voting Rights Counsel and Interim Executive Director for the Southern Coalition for Social Justice. “Just as importantly, now that this issue has been resolved, county boards of elections can now continue the important process of helping voters address potential issues, so these ballots can be counted quickly and accurately.”

“Tonight’s decision from the U.S. Supreme Court is an unmitigated victory for North Carolina voters. It rejects a completely unfounded attack on the absentee ballot cure procedure that a federal judge ordered months ago and declines to up-end settled constitutional law, which would have injected chaos into the election,” said Jon Sherman, Senior Counsel for Fair Elections Center. “Thousands of North Carolina voters have already cured minor defects with their absentee ballots so their votes will count, and thousands more will do so. The integrity of our elections are protected when voters’ rights are protected.”

In North Carolina, approximately 827,000 mail-in ballots have been received through Oct. 27. An estimated 98.6% of those ballots have been accepted, including at least 3,400 which have already been cured. More than 6,500 ballots have been identified as having potential issues that voters may have the chance to correct.