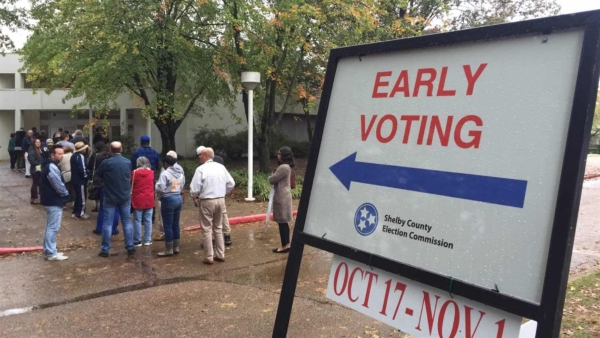 NASHVILLE, Tenn. (April 22, 2019) – The Southern Coalition for Social Justice urged Tennessee lawmakers to abandon efforts that could lead to criminal and civil liabilities for civic organizations engaged in voter registration efforts.  The message came in the form of a letter sent to Tennessee state senators on Thursday, April 18, on behalf of the Memphis Chapter of the A. Philip Randolph Institute.  The letter points out practical and constitutional problems found in legislation (SB 0971 / HB 1079) moving through the Tennessee General Assembly.  HB 1079 was approved by the House on April 15.  The Senate is expected to consider SB 0971 and several amendments on Monday, April 22.

“This legislation, if adopted, would have a chilling effect on organizations whose mission helps assure that their fellow neighbors and community members are registered to vote,” said Kareem Crayton, Executive Director of the Southern Coalition for Social Justice.  “There may be ways to improve voter registration activities in Tennessee that can work to the benefit of election administrators, voter registration organizations, and Tennessee voters, but this proposal isn’t it.  Lawmakers should have an open and honest process that brings together stakeholders and find a path forward that does not violate the constitutional rights of civic organizations or put them at risk of facing extraordinary fines and criminal charges.”

Founded in 1965, the A. Philip Randolph Institute (APRI) is a nonprofit, non-partisan organization that advances the political, social, and economic rights of all working-class people. The organization has 114 chapters in 36 states.  The Memphis Chapter of APRI regularly conducts get out the vote (GOTV) activities in historically disenfranchised communities in Memphis, Tennessee.  In 2018, the Memphis Chapter collected roughly 2,500 voter registration applications through door-to-door canvassing, church forums, and community events.

“To criminalize organizations or groups who turn in 100 or more incomplete voter registrations forms is a new form of voter suppression and intimidation,” said Kermit Moore, President of the Memphis Chapter of the A. Philip Randolph Institute.  “It is the duty of local election officials and the Secretary of State to verify registrations, not organizations that register voters. We should not be returning to Jim Crow Laws in 2019.  There must be a better way to go forward, and we would welcome the opportunity to work with stakeholders to find a solution that works for everyone and protects the rights of organizations like ours.”

In the letter to state senators, the Southern Coalition for Social Justice informs lawmakers that the proposed legislation appears to:

“Ultimately, this legislation would impose serious burdens on important and constitutionally protected work of the civic organizations who run voter registration programs,” added Kareem Crayton.  “This bill is not in the best interest of voters in Tennessee and it should be rejected.”

A copy of the letter sent to Tennessee lawmakers by the Southern Coalition for Social Justice on behalf of the Memphis Chapter of the A. Philip Randolph Institute can be found at http://bit.ly/MemphisAPRI.

The Southern Coalition for Social Justice (SCSJ) partners with communities of color and economically disadvantaged communities in the South to defend and advance their political, social and economic rights through the combination of legal advocacy, research, organizing and communications.

The Memphis Chapter of the A. Philip Randolph Institute (APRI) works to strengthen the ties between the labor movement and the community.  The organization is a leading voice that boosts the political impact of black voters and increases black participation in the labor movement.  APRI seeks structural changes through the American democratic process by engaging its members on social, economic, labor, political and legislative issues.