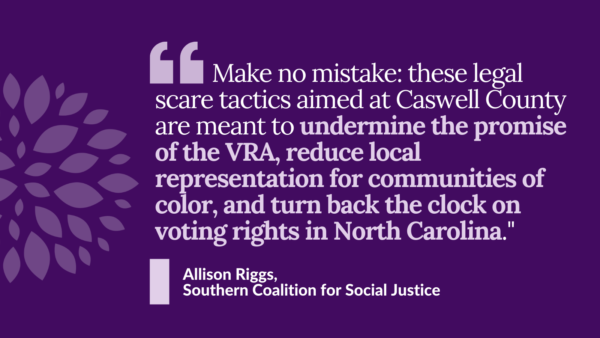 Yanceyville, N.C. (November 24, 2021) — The Southern Coalition for Social Justice (SCSJ), with pro bono counsel from Mayer Brown, moved to intervene on Wednesday in a lawsuit seeking to eliminate two districts that have historically allowed Black voters to elect their candidates of choice in Caswell County, North Carolina.

SCSJ brought the motion on behalf of the North Carolina State Conference of the NAACP (NC NAACP), which is seeking to defend the 1988 federal consent decree in NAACP v. Caswell County and preserve the districts for Black voters that resulted from that order.

“Make no mistake: these legal scare tactics aimed at Caswell County are meant to undermine the promise of the VRA, reduce local representation for communities of color, and turn back the clock on voting rights in North Carolina,” said Allison Riggs, Co-Executive Director and Chief Counsel for Voting Rights with Southern Coalition for Social Justice. “Our clients, who represent the very voters harmed by these egregious attacks, must be allowed to join with local officials to fight these egregious attacks and ensure decades of struggle and sacrifice were not in vain.”

Just days before the Caswell County Board of Commissioners’ November 15 meeting to discuss new voting districts, the same attorney who brought the case in Wrenn threatened county officials with a lawsuit should the county adopt districts that have allowed Black voters to elect candidates of their choice for more than three decades. The attorney’s menacing letter compared Black opportunity districts in Caswell County to the lines drawn to segregate “colored” [sic.] and white voters in the 1950s.

“These white supremacist efforts to erode North Carolina’s Black voting power are the real-life consequences of a weakened Voting Rights Act,” said Deborah Dicks Maxwell, President of the NC NAACP. “Without our intervention, we fear these new tactics to bully local officials could continue to roll back years of progress for voters in North Carolina.

The case, filed in Caswell County Superior Court, is expected to be heard in December 2021.