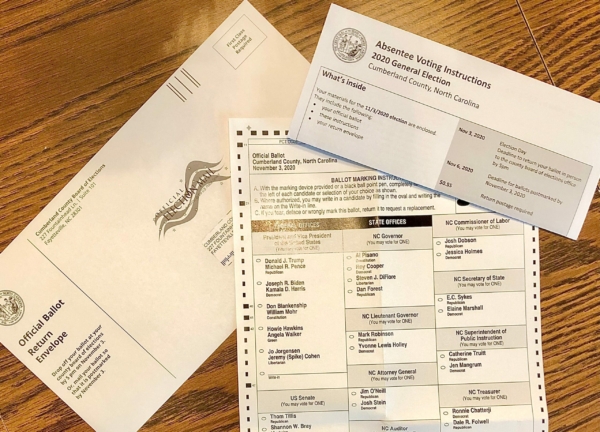 DURHAM, N.C. (July 29, 2021) — North Carolina’s 2020 mail-in “cure” process allowed nearly 20,000 North Carolinians to have their votes counted in the general election, according to a new report from Southern Coalition for Social Justice (SCSJ).

In August 2020, a federal judge granted a partial preliminary injunction in Democracy NC v. NC State Board of Elections. The injunction prevented the N.C. State Board of Elections from rejecting absentee-by-mail ballots in the upcoming election without notice and the opportunity to  correct, or cure, certain deficiencies.  SCSJ filed this lawsuit, alongside co-counsel WilmerHale and Federal Elections Center, on behalf of Democracy North Carolina, League of Women Voters of North Carolina, and eight individual voters.

SCSJ’s analysis of mail-in ballots with material errors from the 2020 November election revealed that the cure process helped almost 20,000 voters either: 1) cure their ballot (9,461) or 2) receive notice of an issue with their mail-in ballot, giving them the option to vote another way (10,006).  The cure process also addressed the disproportionate impact of mail-in ballot rejections on voters of color in North Carolina. For example, of the more than 7,000 Black voters who had material defects with their mail-in absentee ballot applications, 27.1%(1,946) were able to use the cure process to have their vote counted and 60% (4,313) were able to find another way to vote.

SCSJ and the other attorneys in Democracy NC continue to advocate on behalf of plaintiffs and mail-in voters who benefited from the cure process.

Hilary Harris Klein, counsel with SCSJ’s voting rights program and a co-author of the cure impact report, said that making the cure process a permanent fixture will protect many more North Carolina votes.

“As we continue to fight for a permanent cure process for mail-in ballot envelopes, we celebrate the tens of thousands of North Carolina voters empowered to make their voices heard in 2020 as a result of our lawsuit,” said Klein. “Recent elections proved that interest in voting by mail has never been greater. We know demanding due process to correct mail-in voting issues will only save more votes, protect more voters, and strengthen our democracy.”

Until the 2020 general election, North Carolina had no uniform process to fix issues with the burdensome list of requirements to properly fill out absentee ballot envelopes. Lack of a fair and simple process forced the rejection of thousands of ballots in each election, with little to no notice to the voter. Almost half (41%) of mail-in ballots rejected in the March 2020 primary were not properly notarized, had a voter’s signature missing, had incomplete witness information, or signature issues —all of which disproportionately impacted voters of color.

Recent guidance from the State Board does require counties to continue using a modified cure process in future elections, pending a final ruling by the court. Nonetheless, without legal or legislative intervention, the future of voter-friendly fixes for mail-in voting mistakes remains uncertain.

In SCSJ’s analysis, Klein added, “There is [currently] no requirement under the North Carolina General Statutes for counties to offer a cure process, and without additional advocacy, North Carolina may return to the dark days of high rejection rates.”

The Southern Coalition for Social Justice, founded in 2007, partners with communities of color and economically disadvantaged communities in the South to defend and advance their political, social, and economic rights through the combination of legal advocacy, research, organizing and communications. Learn more at southerncoalition.org and follow our work on Twitter, Facebook, and Instagram.