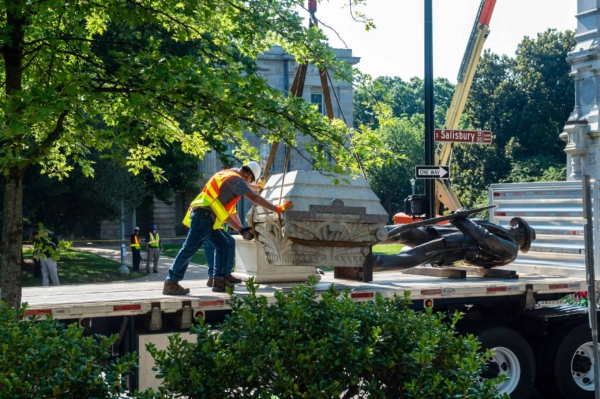 A Monument serves as a structure erected to commemorate a famous or notable person or event. Confederate Monuments serve as way to honor those who vowed to uphold the values and ideals of slavery. In addition to the evident badges of slavery and injustice that Black and Latinx people face within the courthouse, they are met with these reminders of inequality and hatred on the outside of the courthouse walls.

The attentiveness to justice has been reestablished in the State of North Carolina. Many are focusing on North Carolina’s commitment to a justice system in which discrimination, inequality, and celebrating a history of oppression has no place. This effort has taken many forms, including recent recommendations of the Task Force for Racial Equity in Criminal Justice appointed by Gov. Roy Cooper.

The National Consortium on Racial and Ethnic Fairness in the Courts has taken a lead role in seeking the removal of such symbols. To that end, the Consortium has adopted a resolution put forward by one of its affiliates, the N.C. Commission on Racial & Ethnic Disparities in the Criminal Justice System (NC CRED). The Commission is a private, nonpartisan advocacy group based in Durham.

As the resolution now endorsed by Southern Coalition for Social Justice states, “The National Consortium supports proponents who advocate for the removal of Confederate monuments from courthouses and judiciary-operated facilities. These tributes were erected to honor Confederate soldiers, officers and leaders who defended a southern economic system that relied on the enslavement and exploitation of Black people. As such, these Confederate monuments celebrate a political ideology of racial segregation and oppression which the National Consortium deems unacceptable and reprehensible.”

The resolution further asserts, “People of color have expressed outrage and offense at having to pass these monuments as they enter courthouses in their communities to obtain services as court users, or to perform their civic duty on a jury, and thereby, are confronted with the duplicitous public message that tends to both invite the public into the ‘Halls of Justice,’ but at the same time intimidate and discourage some from their rightful entitlement to full access and fair treatment in the judicial system.”

Southern Coalition for Social Justice therefore joins NC CRED and its national allies in urging the removal of all such “Confederate monuments, memorials, flags, plaques, and other symbols and markers of racism and white supremacy, from all public spaces on, around, or within all property upon which courthouses or judicial offices of any kind are located.”