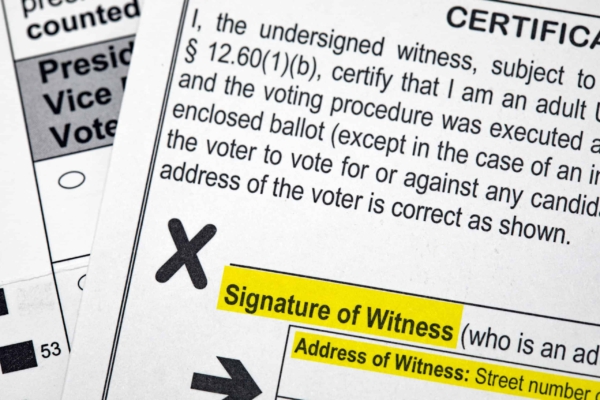 Durham, N.C. — Voters in North Carolina who choose to vote by mail will have greater clarity around the process for correcting mistakes on their ballot envelope following a ruling in the U.S. District Court for the Middle District of North Carolina. The rulings by Judge William L. Osteen, in line with his preliminary injunction order instructing that North Carolina voters who make a mistake on their ballot must receive notice and an opportunity to fix mistakes, will help ensure a greater number of North Carolina ballots are counted this General Election.

Under the rulings, voters who cast their ballots by mail will be able to correct at least the following errors on the ballot envelope without having their ballot spoiled and starting anew:

Ballot envelopes missing a witness signature will still be spoiled (not counted), although voters will receive notice and will be able to cast a new ballot. The State Board of Elections announced on Thursday morning that they plan to issue further clarifying guidance.

Osteen’s ruling upheld a previous preliminary injunction he issued in August in Democracy North Carolina et. al. v. North Carolina State Board of Elections et. al. requiring county boards of elections to notify voters of possible issues with mail-in ballot envelopes and provide voters with due process to correct the issue. The plaintiffs in that case, represented by the Southern Coalition for Social Justice, Fair Elections Center and pro bono counsel from law firm WilmerHale, asked Osteen to enforce the injunction following unclear guidance from the North Carolina State Board of Elections (NCSBE) on the notification and remedy process, known as “curing.”

Osteen also ruled in two separate lawsuits filed by North Carolina’s legislative leadership and the Republican Party challenging the limited guidance on the cure process previously provided by NCSBE. The motions for preliminary injunction in both of those cases were denied.

The first mail-in ballots in North Carolina were sent to voters on Sept. 4; ballots must be postmarked by Nov. 3 and received by Nov. 12 to be counted in the General Election.

In North Carolina, approximately 546,700 mail-in ballots have been received through Oct. 14. An estimated 97.4% of those ballots have been accepted, including at least 1,100 which have already been cured. Almost 6,800 ballots have been identified as having potential issues that voters may have the chance to correct. Many counties stopped reporting potentially curable ballots while they waited for the legal process to play out, so it is likely that number is actually higher.

“Today was a win for our clients and for all North Carolina voters who need to correct a problematic mail-in ballot. With just under three weeks until Election Day, more votes have already been cast by mail this General Election than in 2016. With so many people choosing to cast their ballots by mail for the first time to protect their health during the COVID-19 pandemic, we are pleased that Judge Osteen has upheld his original position that voters should be given the opportunity to correct simple errors,” said Allison Riggs, Chief Voting Rights Counsel and Interim Executive Director for the Southern Coalition for Social Justice. “Now that county boards of elections have the clarification they needed on the cure process, they can restart the important work of helping voters address potential issues and making sure every ballot cast is counted.”

“This has been a hard battle for voting in North Carolina. Finally people can make sure their ballots are cured and given an opportunity to be corrected so their votes count,” said Jo Nicholas, President of the League of Women Voters of North Carolina. “Our purpose for involvement was to make sure every vote counts in this year of the pandemic voting.”

“Over two months ago, Judge Osteen correctly ruled that the U.S. Constitution requires that absentee voters be given a chance to cure minor issues with their mail ballots. That necessary and modest ruling came under attack in three different federal lawsuits, but those efforts have been rejected,” said Jon Sherman, Senior Counsel at Fair Elections Center. “North Carolina voters can now have confidence that there is a clear process to cure a ballot with a minor problem or to spoil and cast a new ballot for problems that cannot be cured. This is a victory for voters.”

Wilmer Cutler Pickering Hale and Dorr LLP (WilmerHale) provides legal representation across a comprehensive range of practice areas that are critical to the success of its clients. The law firm’s leading Intellectual Property, Litigation/Controversy, Regulatory and Government Affairs, Securities, and Transactional Departments participate in some of the highest-profile legal and policy matters. With a staunch commitment to public service, the firm is renowned as a leader in pro bono representation. WilmerHale is 1,000 lawyers strong with 13 offices in the United States, Europe and Asia. For more information, please visit www.wilmerhale.com