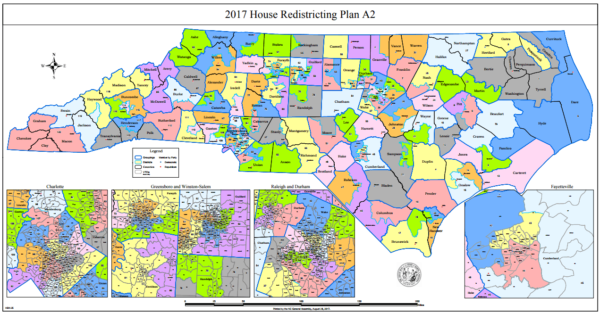 RALEIGH, N.C. – Plaintiffs in a state court redistricting challenge have asked a three-judge panel in Wake County Superior Court to order new districts into effect that comply with the North Carolina Constitution.  The motion comes less than 24 hours after the U.S. Supreme Court ordered that districts drawn by a Special Master that remedy racially gerrymanders be included in the state’s districting plan but temporarily blocked the Special Master’s recommended House districts in Wake and Mecklenburg Counties that were intended to resolve state constitutional violations.

In December, plaintiffs in Dickson v. Rucho asked the three-judge panel in Wake County Superior Court to retain jurisdiction in the case until it was clear that the remedy enacted at the federal level in Covington v. North Carolina also fixed any state constitutional violations.  The order by the U.S. Supreme Court on Tuesday leaves the door open for the state court to take up this matter.

The Southern Coalition for Social Justice represents the N.C. NAACP, the League of Women Voters of North Carolina, Democracy North Carolina, the N.C. A. Philip Randolph Institute, and more than 30 individual plaintiffs in Dickson v. Rucho.

Today’s filing can be found at http://bit.ly/DicksonEmRelief

“The stay entered yesterday by the United States Supreme Court does not deprive this state court of the authority or duty to interpret the state constitution and to ensure that Joint Plaintiffs are afforded full constitutional relief.”  (p. 5)


“It is not sufficient that the General Assembly simply enact new districts if these new districts also do not correct the constitutional flaws and comply with state and federal law.  This Court can and must intervene if deficiencies are identified and left unaddressed. The North Carolina Supreme Court upheld this exact kind of intervention in Stephenson v. Bartlett…” (p. 8)


“Thus, because the Special Master’s and Covington plaintiffs’ proposed maps in these counties remedy the racial gerrymandering violation without affecting House Districts 36, 37, 40, 41 and 105, it is clear that the enacted Wake and Mecklenburg County House district configurations violate the state constitutional prohibition on mid-decade redistricting and cannot be enacted or approved by this Court.”  (p. 13)


“For all the foregoing reasons, Joint Plaintiffs respectfully request that this Court: