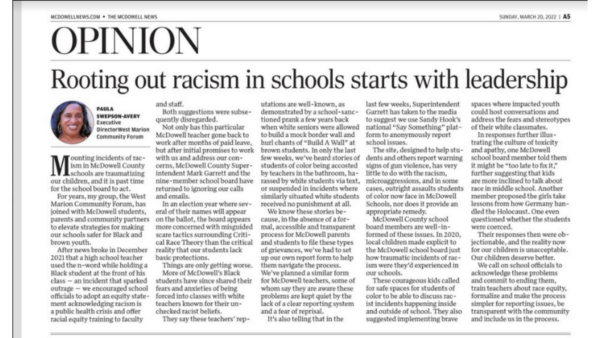 Mounting incidents of racism in McDowell County schools are traumatizing our children, and it is past time for the School Board to act.

For years, my group, the West Marion Community Forum, has joined with McDowell students, parents, and community partners to elevate strategies for making our schools safer for Black and Brown youth. After news broke in December 2021 that a high school teacher used the n-word while holding a Black student at the front of his class — an incident that sparked outrage — we encouraged school officials to adopt an equity statement acknowledging racism is a public health crisis and offer racial equity training to faculty and staff.

Both suggestions were subsequently disregarded.

Not only has this particular McDowell teacher gone back to work after months of paid leave, but after initial promises to work with us and address our concerns, McDowell County Superintendent Mark Garrett and the nine-member School Board have returned to ignoring our calls and emails. In an election year where several of their names will appear on the ballot, the Board appears more concerned with misguided scare tactics surrounding Critical Race Theory than the critical reality that our students lack basic protections.

Things are only getting worse.

More of McDowell’s Black students have since shared their fears and anxieties of being forced into classes with white teachers known for their unchecked racist beliefs. They say these teachers’ reputations are well-known, as demonstrated by a school-sanctioned prank a few years back when white seniors were allowed to build a mock border wall and hurl chants of “Build A Wall” at Brown students. In only the last few weeks, we’ve heard stories of students of color being accosted by teachers in the bathroom, harassed by white students via text, or suspended in incidents where similarly situated white students received no punishment at all.

We know these stories because, in the absence of a formal, accessible, and transparent process for McDowell parents and students to file these types of grievances, we’ve had to set up our own report form to help them navigate the process. We’ve planned a similar form for McDowell teachers, some of whom say they are aware these problems are kept quiet by the lack of a clear reporting system and a fear of reprisal.

It’s also telling that in the last few weeks, Superintendent Garrett has taken to the media to suggest we use Sandy Hook’s national “Say Something” platform to anonymously report school issues. The site, designed to help students and others report warning signs of gun violence, has very little to do with the racism, microaggressions, and in some cases, outright assaults students of color now face in McDowell Schools, nor does it provide an appropriate remedy.

McDowell County School Board members are well-informed of these issues. In 2020, local children made explicit to the McDowell School Board just how traumatic incidents of racism were they’d experienced in our schools.

These courageous kids called for safe spaces for students of color to be able to discuss racist incidents happening inside and outside of school. They also suggested implementing brave spaces where impacted youth could host conversations and address the fears and stereotypes of their white classmates.

In responses further illustrating the culture of toxicity and apathy, one McDowell School Board member told them it might be “too late to fix it,” further suggesting that kids are more inclined to talk about race in middle school. Another member proposed the girls take lessons from how Germany handled the Holocaust. One even questioned whether the students were coerced.

Their responses then were objectionable, and the reality now for our children is unacceptable. Our children deserve better.

We call on school officials to: acknowledge these problems and commit to ending them, train teachers about race equity, formalize and make the process simpler for reporting issues, be transparent with the community, and include us in the process.