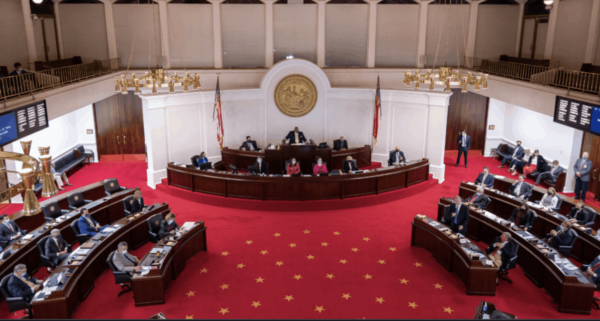 State Senators, sent to Raleigh to pass a budget that addresses North Carolinians’ needs, have just advanced new anti-voter proposals in a fiscal plan with lasting impacts on the freedom to vote.

The latest version of the budget, which passed the Senate and now heads to the House, includes multiple attacks on North Carolina’s election administration system, specifically the State Board of Elections and the governor. The Senate’s ambush is aligned with a national trend to strip election administrators’ ability to ensure safe elections and respond to emergencies.

As a voting rights lawyer based in North Carolina, I wasn’t surprised. In a trend all too familiar in recent years, this 427-page Senate budget buries unpopular provisions from this session’s anti-voter bills alongside new and deceptive measures.

First, the Senate budget puts our safety on the line, rigging the rules of the game by stripping the governor’s power to quickly respond to emergencies like COVID-19. Regardless of their party, the governor’s emergency powers offer crucial flexibility when disasters impact voting. In 2020, emergency actions allowed for tens of thousands of voters to correct simple mistakes in mail-in voting and assure them that their votes would arrive on time. Tying the hands of the governor to issue emergency declarations could then undermine the State Board of Elections’ ability to administer a smooth election and disenfranchise voters when disasters like hurricanes inevitably occur.

Similarly, the budget includes another power grab, eliminating the flexibility of the State Board and attorney general to settle election lawsuits and instead gives that authority to the legislature. Borne from partisan ire over an unanimous, bipartisan agreement reached prior to the 2020 election, this cynical provision furthers a national trend that puts politics over people. If passed, voters will face an even more complicated path to the polls subject to the whims of lawmakers.

Earlier this month, budget sponsor Sen. Ralph Hise told an audience in the Senate Rules committee that if counties needed money for their elections, they should ask for it. They are.

Facing public scrutiny already, a few days ago the budget sponsors thankfully amended their bill to remove deep election funding cuts that would have surely set our elections up for failure. If lawmakers can remove those harmful provisions, the N.C. House can eliminate other proposals that weaken our elections, and we’ll be calling on them to do so. Legislators could then turn their focus to thinking beyond inequitable reductions toward public investments that work for all North Carolinians, including Medicaid expansion, a thriving wage for public educators, and investments in making voting more accessible.

At the Southern Coalition for Social Justice, we stand with North Carolinians holding the line on the right to vote. That means simplifying the voting process, protecting voters during elections, and building trust in our democratic process.

It’s all of our jobs now to remind lawmakers to do the same.

Allison Riggs is Co-Executive Director and Chief Counsel for Voting Rights at Southern Coalition for Social Justice based in Durham.