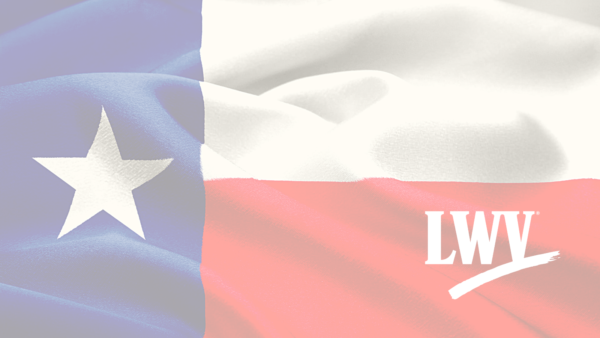 Angry at his party’s failure to pass a sweeping anti-voter law, last month Texas Governor Greg Abbott signed a new state budget that defunds the entire state legislature. The move endangers our democracy, undermines the will of Texans, and attacks the constitutional checks and balances on which our government depends.

Gov. Abbot’s knee-jerk decision to stop funding our state’s legislative branch in order to punish Texas electeds who were forced to walk-out of the legislature to stop an unprecedented attack on our freedom to vote, now means paychecks of legislative staff and possibly state pensions are on the line. Instead of focusing on COVID-19 relief or our state’s failing power grid and infrastructure, the same governor who just railed against defunding the police has added defunding Texas to a legacy that puts partisanship above our people.

Gov. Abbot’s attack on our state’s checks and balances will not go unchecked.

This week, my organization, the League of Women Voters of Texas, filed an amicus brief attached to pending lawsuits against Gov. Abbott’s recent budgetary moves, highlighting the many ways the governor’s latest anti-democratic abuse of power will impact people of all political stripes across the Lone Star state.

Of particular concern is the upcoming redistricting cycle, mandated by the U.S. and Texas Constitutions. Among the groups defunded by Gov. Abbott’s budget veto is the Legislative Council that provides critical technical and legal support to the Texas legislature throughout the redistricting process. By defunding this nonpartisan agency, the governor has jeopardized the legislature’s ability to produce new district maps and provide for free and fair elections. The census data to begin drafting new political maps arrives in August and a special session on redistricting is planned for early fall.  Elected officials must now plan to create voting maps without the benefit of expert legal and technical assistance, jeopardizing this once-every-ten-years process and ultimately the fairness of our districts and power of our votes.

In the process of attempting to penalize lawmakers — whose salaries and per diems are protected under the constitution — Gov. Abbott pulled funding for the essential workers of our state legislature. Legislative office staff work hard to meet the needs of the constituents and broader public that their legislators serve. For example, staff at the Legislative Budget Board develops budget and policy recommendations for legislative appropriations, completes fiscal analyses for proposed legislation, and conducts evaluations and reviews to improve the efficiency and performance of state and local operations. The Sunset Advisory Commission helps ensure government accountability to the Legislature and people of Texas by objectively evaluating the need for and value of state programs and services. The State Auditor improves government accountability by investigating allegations of illegal acts and improprieties involving any entity that receives funds from the state. All of these positions were undermined and will go unpaid with the stroke of Gov. Abbot’s veto pen.

Governor Abbott’s defunding of the legislative branch and vital offices is dangerous to our democracy and undermines the will of the people and the checks and balances upon which our government is built. It’s vital that all Texans declare our independence from party politics and unite as one voice against this unprecedented anti-democratic move.