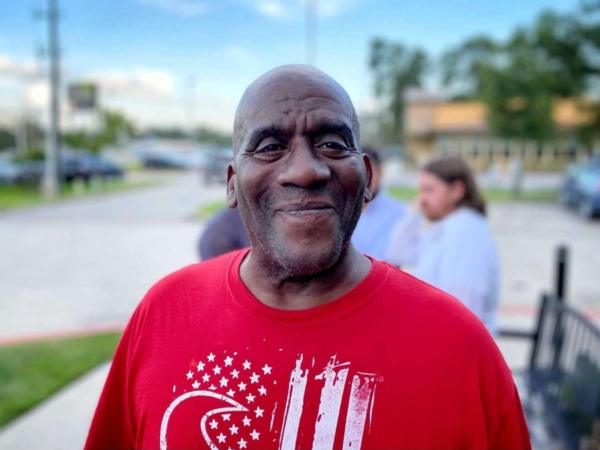 Last week, when Attorney General Ken Paxton arrested Hervis Rogers for allegedly casting an illegal ballot, he did so knowing that Rogers is considered an American hero.

Rogers made national headlines after waiting more than six hours to vote at a Houston polling place during the 2020 primary. Few can forget the images of the then 62-year-old, emerging tired but victorious from the polls just past 1 a.m., arms raised, wearing his “I Voted” sticker.

Now, this same voter who told the media last year, “I wouldn’t feel right if I didn’t vote … it’s worth it,” faces decades in prison after becoming the target of Paxton’s political dragnet.

Let’s be clear: Rogers, who was on parole from a decades-old conviction, wouldn’t have been punished if he lived in Maine, Vermont or 21 other states that either grant automatic restoration of the right to vote upon release from prison or never strip voting rights at all.

However, Rogers voted in the Lone Star State, where those convicted of a felony cannot vote until completing their sentence, including probation and parole. His parole expired in June 2020, two months after the Texas primary. He also voted in November, 2018. Under Texas law, this simple misunderstanding could send him back to jail for 40 years.

While Rogers went to exceptional lengths to cast a ballot, his confusion around his state’s voting laws is far from unusual. Like many of the 6.1 million Americans disenfranchised by a racist criminal-legal system, Rogers wasn’t made aware that he couldn’t vote. In fact, he told his attorneys that he thought he was “doing the right thing.”

Rogers’ story is strikingly similar to that of another Black Texan, Crystal Mason. The state’s highest criminal court just agreed to review Mason’s illegal voting conviction after this Tarrant County mother and grandmother faced a five-year prison sentence for casting a provisional ballot that never counted in 2016. Mason’s mother, also confused by the law, had encouraged her daughter to vote while she was on supervised release.

Yes — some Southern states, like Florida, represent an encouraging national trend toward restoring the right to vote for justice-involved individuals at some point. But as an attorney fighting for people like Rogers and Mason across the South, I know that determining a voter’s eligibility involves a complex web of state election laws and criminal codes, leaving everyone from parole officers to poll workers to justice-involved people themselves unclear about the process of re-enfranchisement.

North Carolina provides another extreme example. The state is home to a “Strict Liability Voting Law” criminalizing voting for those ineligible due to a felony conviction, whether they intend to vote illegally or not. Originating in 1877, the law represents the last surviving vestige of post-Reconstruction measures meant to disenfranchise Black people.

Now, over 140 years later, North Carolina continues to criminalize the votes of justice-involved Black people, as the state did in high-profile cases like that of the “Alamance 12.” In Alamance County, a dozen formerly-incarcerated Black voters cast ballots in 2016 believing they were eligible. I’m representing the voting rights groups advocating for them, ensuring that more people don’t face felony charges again for the mistake of voting in their state.

One of the Alamance 12, Taranta Holman, who had never voted before 2016, and, like Crystal Mason, was encouraged by his mother, told the New York Times, “Even when I get this cleared up, I still won’t vote. … That’s too much of a risk.” Others similarly charged told us they now discourage their kids from voting, setting in motion a chilling effect that “disappears” even more Black voters.

These extreme measures, reinforced repeatedly across the South, could not only return Black voters like Holman, Mason or Rogers to prison for years, they may also destroy faith in voting in their communities for generations to come.

Of Hervis Rogers’ heroic act of voting in 2020, Atlantic writer David Frum noted, “Nobody should be asked to be this impressive.”

We believe this should be true for any adult citizen who tries to vote, regardless of your past.

Brown is an Equal Justice Works Fellow sponsored by the Ottinger Foundation at the Southern Coalition for Social Justice.