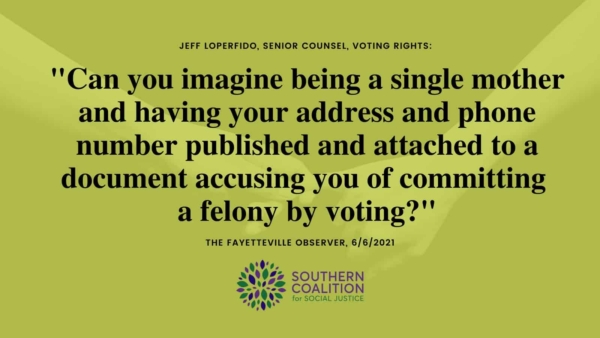 In his recent opinion piece (“North Carolinians have the right to know about foreigners voting in their elections”), J. Christian Adams mischaracterizes both why he’s seeking sensitive information about North Carolina voters and a court’s recent ruling protecting it.

Adams’ group, the Public Interest Legal Foundation (PILF), requested personal information from the North Carolina State Board of Elections about registered voters who were identified as “potentially not satisfying the citizenship requirements for registration,” including people who have since proven their US citizenship.

These requests, which targeted North Carolina’s most urban and non-white counties, sought a broad category of documents, including completed voter application forms and affirmation of citizenship forms. These documents can contain birth dates, addresses, driver’s license numbers, partial Social Security numbers and even copies of voters’ birth certificates and passports.

The board, in turn, gave PILF all of the voter information they could legally provide without violating federal privacy laws — but Adams’ organization still sued for more. A federal district court dismissed PILF’s lawsuit, and they appealed, asking the Fourth Circuit Court of Appeals to deliver to them what state elections officials believed they could not.

While the Fourth Circuit Court of Appeals recently sent this case back to the federal district court for further consideration of some of PILF’s specific requests, the court’s ruling nevertheless made it plain that voter privacy should remain a primary consideration for the lower court. The three-judge panel wrote that they “agree in large part with the [State] Board’s position” to withhold much of the information from PILF and ruled the lower court should follow federal laws that “protect the privacy of individuals and confidential information held by certain governmental agencies.”

The Fourth Circuit’s instructions to make voter privacy a priority in this case echo Southern Coalition for Social Justice (SCSJ)’s arguments in our “friend of the court” brief. We illustrate precisely why North Carolina voters have grounds to be concerned about the misuse and abuse of sensitive voter information:  In Virginia, PILF previously sought and made public the detailed contact information of thousands of Virginia voters who were flagged by the state as being “potential noncitizens.” PILF accused some of these Virginians of voting illegally, forcing some of these same voters to file intimidation and defamation claims against the organization in order to clear their names.

Can you imagine being a single mother and having your address and phone number published and attached to a document accusing you of committing a felony by voting — and the fear for your safety and for your children’s safety that would create? That’s what happened to one of our clients in Virginia. And that’s what we believed could happen to even more voters in North Carolina should PILF prevail.

Adams states that in filing our brief, SCSJ is “trying to prevent the public from knowing how the problem of foreigners voting really is.” The reality is that we represent voters who otherwise could be subject to intimidation if private parties like PILF are allowed to disclose sensitive election data without proper context and safeguards.

As we said in the brief, there are already systems in place to prevent rare occurrences of non-citizen voting. For example, the State Board’s post-election audit in 2017 identified a mere 41 non-citizens with legal status who cast ballots in the 2016 election from nearly 4.8  million ballots cast. The board noted that confusion about immigration law and citizenship status was often to blame in the case of these ineligible voters voting, not intentional voter fraud.

The audit also identified 34 additional voters who were flagged as non-citizens but subsequently provided proof of citizenship, highlighting the fact that data matches alone are not sufficient to verify citizenship, especially when a voter can be flagged simply for failing to correctly complete the citizen status “check box” on a voter registration form.

In this volatile political moment, voters of color falsely accused of illegal voting are justifiably fearful of threats and intimidation. We are grateful for the Court of Appeal’s clear guidance to protect these voters’ identities and personal information, which includes shielding North Carolinians from public disclosure and potential harassment.

Jeff Loperfido is Senior Counsel in the Voting Rights Group at the Southern Coalition for Social Justice.