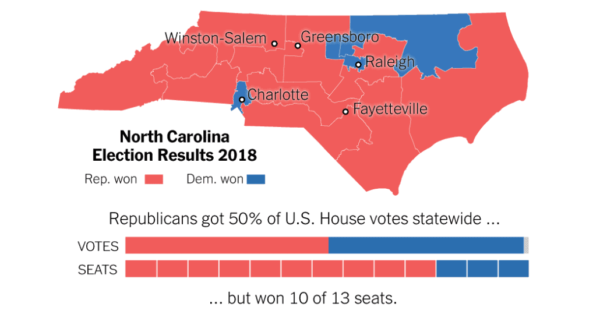 WASHINGTON, D.C. – Plaintiffs in Rucho v. League of Women Voters of North Carolina filed their final brief with the U.S. Supreme Court today, just more than three weeks before the Court is slated to hear oral arguments in the partisan gerrymandering cases out of North Carolina and Maryland on March 26.  Lower court victories for the plaintiffs mark the first time an entire state’s congressional plan has been struck down for being an unconstitutional partisan gerrymander.

The following statements were issued after today’s filing was made:

“This case cries out for intervention by the U.S. Supreme Court to rein in out-of-control partisan manipulation of the redistricting process,” said Allison Riggs, senior voting rights attorney for SCSJ.  “You’d be hard-pressed to find a more blatant example of voters being denied their constitutional rights to equal protection under the law and to free speech than the North Carolina’s 2016 congressional redistricting plan.  When legislators brag about their attempts to entrench themselves in political power and enact maps designed to guarantee election winners before a single vote is cast, courts are the only hope for a remedy.  These legislative actions are inconsistent with the basic principles of representative democracy that we hold so dear.”

“Citizens in all 50 states deserve to be able to choose their representatives – and not the other way around. This is why we need a national solution, and why we look forward to bringing the fight for fair maps to the U.S. Supreme Court this month,” said Paul Smith, vice president of CLC. “It is time for the U.S. Supreme Court to act. They have a golden opportunity to enforce the Constitution in a manner that will rein in partisan gerrymandering – done by both parties – and create ground rules that safeguard the fundamental right of all Americans to have their vote count.”

The plaintiff’s briefs were filed with the U.S. Supreme Court and should soon appear on the case’s docket page located at https://www.supremecourt.gov/search.aspx?filename=/docket/docketfiles/html/public/18-422.html

The brief can also be found at https://campaignlegal.org/document/rucho-v-league-women-voters-north-carolina-us-supreme-court-brief-appellees