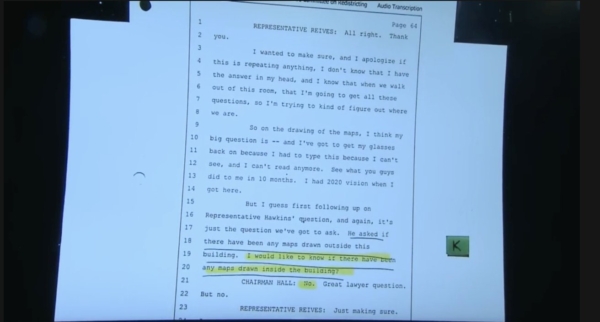 Raleigh, N.C. (January 5, 2022) — A North Carolina lawmaker charged with drawing the state’s voting maps revealed he consulted “concept maps” previously undisclosed to the public and his Democratic colleagues, according to testimony during day three of the state’s redistricting trial.

Rep. Destin Hall, who led the N.C. House redistricting process, told attorneys about the “concept maps” during cross examination by plaintiff counsel Southern Coalition for Social Justice. According to a sworn deposition, the Caldwell County Republican and his aide consulted these outside maps during“strategy sessions” in a private area outside of the N.C. General Assembly’s publicly-available map-drawing room.

While Hall testified on direct examination that he only used the maps for “a matter of seconds,” and “they weren’t very helpful,” he told plaintiffs’ attorneys during last week’s deposition the maps had a more substantive purpose — providing “a game plan” for House districts.

During Wednesday’s cross-examination, Hall said he was unaware if the aide who drew the maps had also consulted racial or partisan data, which was barred by lawmakers’ own map-drawing criteria. Hall’s legal team  told the court the outside maps were not saved and are “currently lost and no longer exist.”

Prior to Hall’s testimony, Republican Redistricting Co-chair Sen. Ralph Hise denied that he has used partisan data in creating enacted maps, the Republican nevertheless admitted chairs made a unilateral decision not to examine the impacts of racially-polarized voting as required by state law, despite multiple warnings from attorneys at Southern Coalition for Social Justice that not doing so would be “fatal” to the representation of Black voters.

The  final witness, Rep. Zack Hawkins, capped the trial with some of the day’s most emotional testimony. The Durham lawmaker, who is Black, said the enacted maps’ impact on African American voters is particularly disturbing. “Everyone knows that eastern North Carolina has a high African-American population,” said Hawkins. “When you see the changes that were made, it raised some big red flags.”

Plaintiff Common Cause’s attorney Allison Riggs asked Hawkins if he felt lied to by Rep. Hall when he denied consulting outside materials during an exchange with House colleague Rep. Marcia Morey.

The lawmakers’ statements were part of a lengthy day of witness testimony from both sides, including experts called by defendant-legislators. The legislative defendants’ testimony exposed how enacted maps erode Black representation and give Republicans an extreme partisan advantage in upcoming state legislative and congressional elections.

The first defense expert of the day, Dr. Jeffrey Lewis admitted he analyzed 17 North Carolina elections to show the cohesiveness of Black voting behavior in the state, despite lamenting having only two weeks to do his research rather than the typical “months” required. While Lewis testified his research showed Black candidates in North Carolina don’t need to run in majority-minority districts to get elected, on cross-examination he said that under 2021’s enacted maps, Senate districts that had previously elected Black candidates, would now not do so. “The win rate dropped to zero,” said Lewis.

Dr. Michael Barber, a political scientist from Brigham Young University, who answered questions from attorneys on both sides for the remainder of the morning, used a Harvard University algorithm to generate simulations that compared the partisan lean of enacted House and Senate maps. On cross examination, Barber corrected inconsistencies between his responses in deposition and in his Wednesday testimony, admitting that enacted House and Senate districts are “pro-Republican partisan outliers.”

Other expert witnesses, election analyst Sean Trende and mathematics professor Dr. Jonathan Mattingly, who was recalled to the stand, were questioned by lawyers about their analyses and conclusions regarding the partisan breakdown of North Carolina’s new state House, Senate, and Congressional maps.

The final day of the North Carolina League of Conservation Voters et al. and Harper et al. and Common Cause v. Hall trial begins at 9 a.m. on Thursday, January 6.

SCSJ will live-tweet the closing arguments on Twitter at @scsj using the hashtag #ncredistrictingtrial and continue to promote WRAL’s live video feed at scsj.org/ncmapstrial.