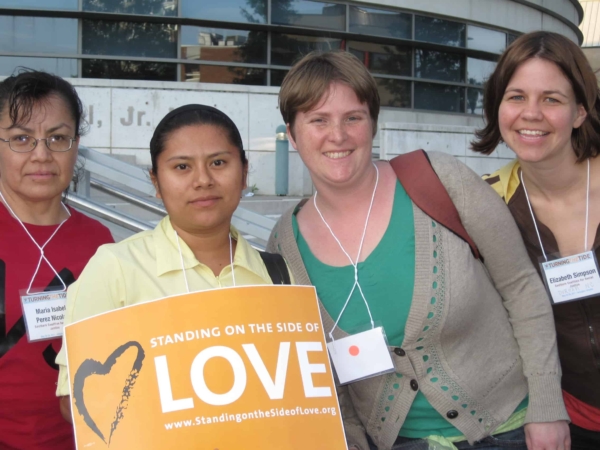 We’ve heard it a million times: that Latinos are the fastest growing segment of the US population (or were until just the other day) and that, together with African Americans, we are among the nation’s poorest and sickest, over-represented in prisons and unemployment lines, and under-represented in schools, business and politics.
We also know that Latinos are the largest of the so-called “minority” groups in the US today and that, together with African Americans, Asian Americans, Native Americans and other People of Color, we will outnumber Whites to become the new “majority” within the next thirty years. That is, if we are still considered “People of Color” by then, since the definition of race has always been flexible and who is considered “White” is changing once again.
This fact, that the definitions of “race” and “whiteness” has actually changed throughout the history of this country, is something not too many people know about or understand. Nor do many people, Latinos and Latinas included, know how people of Latin American origin in the US have been racially defined—and re-defined—over the past 195 years since the US purchase of Florida, the Mexican-American and Spanish-American Wars, and its on-going relationships with Latin America and the Caribbean. Nor have many people, Latino and otherwise, closely examined the origin and implications of the term “Hispanic,” or its impact on our identity and, potentially, on our collective social, cultural, economic and political well-being.
In the Latino Challenges Toward Racial Equity workshop, to be held January 17-18, 2014 in Greensboro NC, we examine the racialization of Latinos in the US. To shed some additional light on the complexities of racial identity of Latinos, we will also provide some historical and cultural context of race and racism in Latin America.
Moreover, we will explore how Latino identity is a source of strength for individuals and families of Latin American origin in the United States. Furthermore, we will propose that a critical understanding of the Latino experience of anyone that works in and with Latino communities is central to ending racial disparities in our institutions and to working together to create racial equity in our society.
Among the topics we will address are:

So, if you work with or on behalf of Latinos and seek to deepen your effectiveness in creating racial equity in the Greensboro-Chapel Hill-Durham area, please come join María Reinat-Pumarejo and me for this workshop. [And if you live and work elsewhere, let’s talk about organizing a workshop in your area.]

Fill out the registration form here. Contact Veronica Hayes at 336-404-2574 or vhayes@racialequityintstitute.org