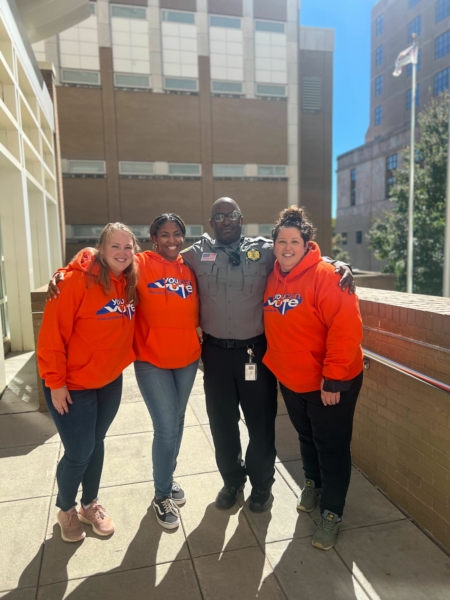 There are more than 740,000 people in jails across the country, the majority of whom are either awaiting trial — they are legally innocent — or serving time for misdemeanor offenses. This means, at least in most states (and all states for those awaiting trial), those populations remain eligible to vote.

However, many of those behind bars are denied their right to cast a ballot due to a variety of barriers, including a lack of awareness and information, resources, polling places and organizational or systematic support.

Where there is eligibility in your state, there is space to advocate for a change in policy — elected officials thus far have been slow to address the disenfranchisement of incarcerated voters. The Prison Policy Initiative (PPI) provides a great starting resource, in which you can research an incarcerated person’s eligibility status and compare it to the barriers that may or may not exist by state.

PPI also recently released follow-up data to their initial report about incarcerated voting barriers, in which a small but growing list of governments addressed some obstacles by establishing polling locations inside local jails where eligible, detained voters can cast their ballots. Their early results show promise for these jail-based polling sites, but also give concrete recommendations for local governments seeking to establish or improve jail-based voting locations. These are recommendations SOLVE members can use as a base for their advocacy.

In the event policy reform is an unlikely avenue in your state, there remains great potential for election officials and sheriffs to remedy existing barriers. Sadly, a significant challenge to registering incarcerated people to vote is the lack of communication between election officials and county Sheriff’s offices around the eligibility of those behind bars.

In North Carolina, the State Board of Elections has a webpage on registering to vote in the criminal legal system, but many incarcerated individuals lack access to the internet. Additionally, as Kate Fellman of You Can Vote pointed out in a recent op-ed, the absence of polling sites at jails means voters behind bars must have access to voter registration forms, absentee ballot request forms, black ink pens, stamps, and envelopes in order to receive a ballot. Most don’t have access to those materials, and jails don’t provide them.

Compounding the problem, most sheriffs perceive registering people in jail to be too tedious of a process and too much work on themselves and their employees. A recent report by Southern Coalition for Social Justice (SCSJ) and You Can Vote found that 74% of respondent sheriff’s offices in North Carolina do not have a written policy to assist eligible voters to register or vote while incarcerated. Many sheriff’s offices expressed the belief that incarcerated individuals aren’t interested in voting. However, most individuals don’t express interest because they are unaware they are eligible.

You Can Vote is one of many organizations working diligently to educate, register, and empower voters both in and out of jails. They educate voters about eligibility, explain what offices are on their ballot, and provide non-partisan candidate guides.

The organization registers voters at jails and walks them through the absentee ballot request form, which is required for incarcerated North Carolinians to receive and cast their ballot from jail. You Can Vote does the majority of the work, so sheriffs and their staff do not have to — but access remains a challenge. All You Can Vote needs is the opportunity to go into the jail and a room or table to register interested people to vote — they provide all the resources once there.

Caitlin Metzguer, Deputy Director at You Can Vote, said it’s almost impossible for folks in jails to access their ballot without the help of organizations like theirs.

As SOLVE fellows interested in learning about this issue and how others could replicate success, we spent some time with You Can Vote before this year’s election. We traveled from Raleigh to Buncombe County in Asheville, North Carolina, to witness and assist eligible voters in the detention facility register to vote and request their absentee ballots.

We did this work block-by-block in the jail from 8 a.m. to 2 p.m. This included setting up a table in each block’s multipurpose room and speaking individually with incarcerated people about voting. In doing so, one of the most rewarding and recurring interactions was informing people they were eligible and seeing how surprised and happy they were. Many held the misconception that just being in jail made them ineligible, and others thought a prior felony conviction disenfranchised them for life. Many were particularly grateful to hear about the recent change in voter eligibility in North Carolina that re-enfranchises people who have been convicted of a felony when they complete their prison or jail sentence.

At the end of our day with You Can Vote, we had a chance to have a personal conversation with Michael Holton, the Buncombe County Detention Center’s Program Manager. We stuffed and labeled envelopes in his office at the end of the day and discussed the importance of You Can Vote’s work.

“It’s just hope — knowing that there are other opportunities that continue to come along for them is lifting their spirit,” he said. “The more information we can provide [those incarcerated], the better off they’re going to be… their life can continue to move forward.”

On our way out, we handed all the envelopes filled with voter registration and absentee ballot request forms to the staff member who oversees outgoing mail.

“I thought I was going to have to do more, but it was simple; it was easy,” Holten commented. “If this is an opportunity for your facility, why wouldn’t you take advantage of this?”

Holton’s words summed up the importance of giving people another chance, a glimpse of hope, to be full citizens of their communities again. Democracy is based on the principle that people have the right to participate in decisions affecting their community, especially in electing the officials who will represent them at the local, state, and federal levels.

You Can Vote and SCSJ are part of a continual effort to ensure that our democracy is truly representative and includes historically excluded and marginalized communities. Justice-impacted people are among the most marginalized in our society, and Black men are especially at risk of disenfranchisement because they are disproportionately affected by mass incarceration.

In order for people in jail to exercise their right to vote, County Boards of Elections (CBE) should establish policies for voting in jails. A recommendation from the Jails Report is for CBEs to authorize and deploy Multi-partisan Assistance Teams to go into jails to assist voters in casting their absentee ballots — such teams are already permitted to go into certain facilities, such as nursing homes, hospitals, and clinics. Facilities should also create an annual schedule with ongoing opportunities for jail residents to register to vote, and during election season, request and have their absentee ballots notarized.

You can help the cause of building a more inclusive democracy by joining the work You Can Vote is doing. This can be by donating to help cover the cost of materials and travel, volunteering, or simply just spreading the word. You can also contact your local sheriff to encourage them to allow organizations like You Can Vote into their facilities. In the words of John Lewis, “The vote is precious. It is almost sacred. It is the most powerful non-violent tool we have in a democracy,” and everyone deserves the right to use it.