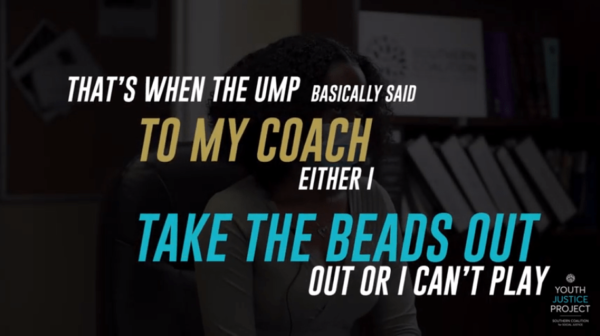 On April 19, 2021, during the second inning of a game against Jordan High School, Nicole, a Black student-athlete, was singled out by a member of the opposing coaching staff, a white man, who raised concerns to the officiating umpires that her hair covered her jersey number in violation of the rules, despite the fact her hair barely reached her shoulder blades. During the game, Nicole’s hair was in box braids with clear beads on the end and tied in a messy bun; she had worn the same style in five previous games with no complaints from the opposing team or officials.

“Without being disrespectful, I asked the umpire, ‘You officiated games where I was wearing these braids and beads, so what is the issue?’” Nicole said. “My braids were not covering my number. I felt like the world was staring at me. Why me? Why anybody for that fact? It was embarrassing and disrespectful.”

Nicole tried tucking her hair inside her shirt but was told that wasn’t good enough. The umpire told her she either needed to take her beads out or leave the game. Ultimately, with the help of her teammates, Nicole cut her beads and ultimately her braids, to remain in the game.

“The humiliation my child experienced could have, and should have, been avoided,” said Julius Pyles, Nicole’s father and a disabled veteran and former law enforcement officer. “A level of professionalism should have resolved this situation so that no child, regardless of color, while under adult supervision, would experience discrimination because of their hairstyle.”

In January 2021, Durham became the first North Carolina city to unanimously pass the “Creating a Respectful and Open World for Natural Hair Act” or CROWN Act, an ordinance to ban hair discrimination within the workplace. However, the law does not apply to students in an educational setting.

To help rectify this situation, Nicole and her father are asking for:

“I don’t want this to happen to anyone else, especially someone who looks like me,” said Nicole.

Advocating on behalf of Nicole, the Southern Coalition for Social Justice is also asking DPS and the NCHSAA to pass policies to eradicate all forms of discrimination in schools and at athletic events. The North Carolina General Assembly is also considering a statewide CROWN Act (SB 165), which SCSJ would like to see expanded to include protections in academic settings.