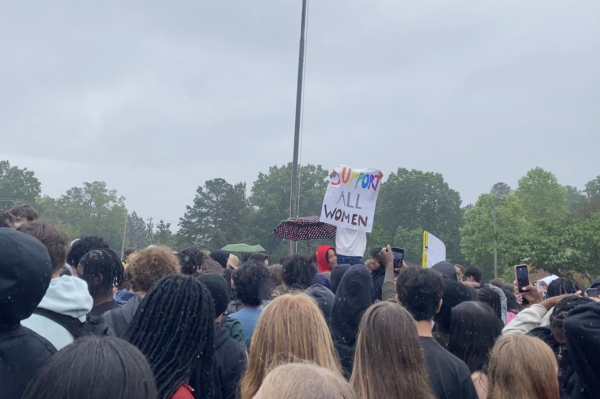 Durham, N.C. (May 12, 2022) — Hundreds of North Carolina students walked out of class Thursday at Charles E. Jordan High School and rallied outside to protest the abortion ban expected in June from the U.S. Supreme Court.

Participants braved bad weather to carry signs smeared by the rain — some read “Abort Patriarchy,” “You can’t ban abortion, you can only ban safe abortion,” and “Protect Choice.” Police officers and teachers watched as the students chanted “My body, My choice,” with teachers trying to corral them back inside after about 30 minutes.

Kayla Carew , 17, carried a colorful sign that read “Support All Women,” and encouraged her fellow classmates to speak up at the protest.

“I’m out here because men shouldn’t be allowed to make laws about women’s bodies,” she said, adding of seeing her fellow classmates, “I feel heard, I feel supported. It’s bringing attention even to the men out here that this is a problem.”

“Kids need to know about this too, because eventually this is the life we are going to be living.”

The student protest follows a May 2 Politico report which leaked draft opinion from the U.S. Supreme Court — penned by Justice Samuel Alito — showing the Republican-appointed majority was prepared to overturn Roe v. Wade.

“Kids need to know about this too, because eventually this is the life we are going to be living.”

The students at Jordan High School, who have never lived without the protections afforded by the landmark Roe decision, expressed fear about what the future would hold for them without it.

“It’s important for us to be able to have those choices,” said Tatiana Delgado, 15. “If it’s not your body, it’s not your choice.”

Members of the Southern Coalition for Social Justice’s Youth Justice Project (YJP) stood in solidarity with their classmates in favor of reproductive rights and rebuking attacks on women’s health.

“I’m out here to protest the eviction of our rights currently happening in the Supreme Court,” said Zora Deberry, 16. “And it’s not just about women, [it’s about] the precedent this sets about taking away our right to privacy and just rolling back access to primary healthcare — things that will keep us alive and healthy.”

Another YJP member, Nicholas Brown, 18, said it was inspirational to see so many students participate in the walkout.

“I feel like it sends a powerful message to the school, to our community, about what we stand for,” he said. “I think it’s important to remember that anybody can do this, [you] can organize this anywhere. If you want your voice to be heard, you can start a protest, a walkout, a petition — there’s numerous ways to be heard, and it’s effective; don’t let anybody tell you otherwise.”

“There’s going to be opposition everywhere, and this is just another example of that, but that doesn’t mean that we cease or we stand down,” she said. “We stand in the face of opposition, and we fight for what’s right.”