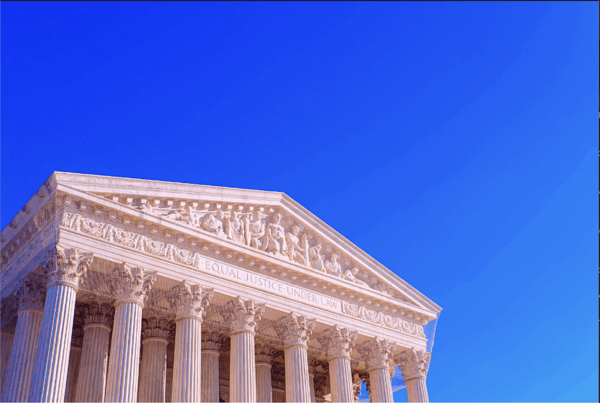 The Supreme Court justices will hear oral arguments in the major voting rights case on December 7, 2022

Washington, D.C. (October 19, 2022) — Common Cause, represented by counsel from Southern Coalition for Social Justice and Hogan Lovells, filed a brief today in Moore v. Harper, the voting rights case going before the Supreme Court in December. The brief emphasizes the proper role of state courts in reviewing the constitutionality of voting laws passed by state legislatures. In Moore, petitioners from the North Carolina legislature are pushing a fringe theory enabling state politicians to manipulate elections by dismantling the checks and balances vital to representative democracy. Oral arguments in Moore v. Harper will be heard by the U.S. Supreme Court on Wednesday, December 7, 2022.

The brief, which was filed jointly by Common Cause, Harper, and League of Conservation Voters respondents, further describes how lawmakers’ desperate and dangerous arguments are inconsistent with the text, structure, and history of the U.S. Constitution, and contradict centuries’ worth of well-established precedent. If adopted, Moore could hand state legislators unchecked power to undermine people’s votes — state courts and governors could not stop them.

Click here to access today’s joint briefing filed by the Common Cause, Harper, and League of Conservation Voters respondents in Moore v. Harper.

“Every voter in our country must be able to take part in our free and fair elections so that we can all have a say in the futures of our families and communities,” said Karen Hobert Flynn, president of Common Cause. “This case is a dangerous attempt to undermine our votes and do away with the checks and balances that our system of government has depended on for centuries. Common Cause will proudly be at the Supreme Court in December ready to stand up again for our freedoms to vote.”

“The people of North Carolina deserve a government that is responsive and accountable. Both North Carolina’s constitution and statutes clearly create a role for courts to review and check the redistricting maps drawn by the legislature for defects,” said Kathay Feng, national redistricting director at Common Cause. “Argue as they may, no one is above the law — certainly not state legislators. We expect the Supreme Court to uphold the rule of law.”

The North Carolina Supreme Court’s historic February 2022 ruling held partisan gerrymandering illegal under the state Constitution and called for new maps that would place people’s interests above that of partisan politicians.  North Carolina lawmakers, despite a 2003 state law creating a role for state courts in redistricting disputes, weaponized the debunked “independent state legislature theory” in their last-ditch appeal this spring to the U.S. Supreme Court.

“Our state constitution and our state courts correctly served as crucial checks against the North Carolina legislature’s abuse of power and illegal gerrymandering. Now some extreme politicians in our state are pushing a radical ploy to obliterate our system of checks and balances. Instead of trying to dismantle constitutional protections, legislators ought to respect the rule of law,” said Bob Phillips, executive director of Common Cause North Carolina. “We look forward to making our case to the U.S. Supreme Court and standing up for the freedoms of all North Carolinians.”

The legal arguments made by the petitioners in Moore are untenable and incoherent, as shown in the briefing filed today and echoed by friend-of-the-court briefs from groups like the bipartisan Conference of State Chief Justices. Nothing in the historical record at the time of the Constitution’s writing supports lawmakers’ arguments, and, in addition, petitioners based a key component of their case on what are widely known to be fraudulent documents. Finally, petitioners baselessly argue for overruling a century of precedent upholding checks and balances in elections.

“The structure of the U.S. Constitution does not end judicial review of state laws — in fact, state constitutions are set up so the judiciary can prevent legislative overreach,” said Allison Riggs, Co-Executive Director and Chief Counsel for Voting Rights at Southern Coalition for Social Justice.

“In 2019, this Court in Rucho v. Common Cause affirmed the importance of judicial review when it comes to upholding rights protected under state constitutions,” Riggs added. “Today’s brief vindicates our approach to follow the proper paths set by the High Court, advocating for North Carolinians’ ability to freely cast a ballot in responsive voting districts.”

Hogan Lovells partner Neal Katyal said: The legal theory relied upon by our opponents is dangerous, unprecedented, and has no grounding in constitutional law. They are asking the U.S. Supreme Court to hold that courts in North Carolina have no authority to review the state’s own voter protection laws—which runs counter to U.S. Supreme Court precedent for the last 100 years. In a brief filed today, we ask the Court to reject this request, which would inject chaos into the electoral system.

Hogan Lovells partner Tom Boer added: The stakes in this case are high—by filing today’s brief, we are seeking ensure that elections in North Carolina proceed in accord with state constitutional protections, and that every individual’s vote–regardless of race or political belief–counts equally. We are proud to be representing Common Cause, and working with counsel at the Southern Coalition for Social Justice, in this effort.

Please go to bit.ly/moorevharper to stay up-to-date on the latest about Moore.