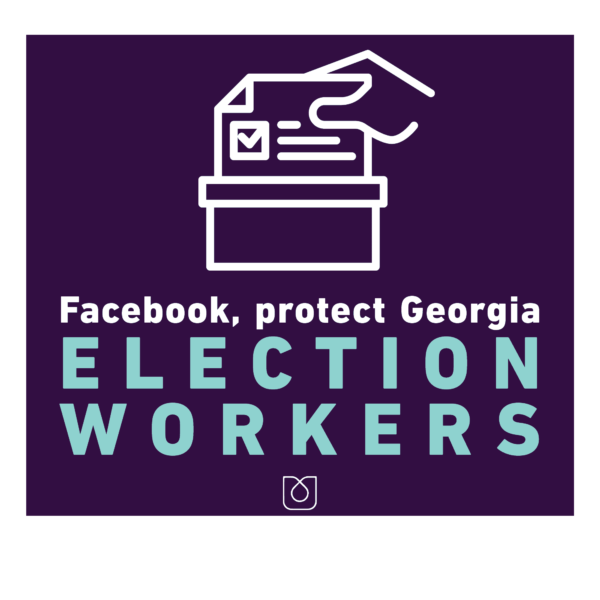 The majority of election workers are women, and many extremists are focusing their attacks on Black election workers in majority Black districts. These Black women who make our democracy work are facing harassment, intimidation, and threats of violence, and Facebook has an opportunity to change that…

…Facebook has served as a site for hateful extremists to spread disinformation, harass election workers, and undermine our votes. Now, heading into the final weeks of the election, it’s critical that Facebook take immediate action to protect Georgia election workers by extending the protections that are provided to journalists and politicians and taking steps to block the spread of disinformation and violence in Georgia.

According to several recent reports, poll workers, especially women poll workers, are facing increased threats and acts of aggression throughout the United States in light of the presidential election earlier this month. In states like Arizona, conservative protesters carrying military-style rifles gathered outside of the Maricopa County election site in Phoenix; law enforcement departments in several states were told to prepare for violence and disruption ahead of time.

Though Facebook has taken actions to recruit poll workers, the coalition of 60 organizations argue that the tech giant is not doing enough to protect them, and that Facebook has a responsibility to prevent harassment and violent threats against poll workers before and during Georgia’s Senate election.

“Given Facebook’s direct role in radicalizing the very people threatening election and poll workers in Georgia, it should be the platform’s top priority to protect them,” explained Fair Fight Action CEO Lauren Groh-Wargo. “We need Facebook to step up and protect the mostly women of color who are working to protect our democratic processes from the dual threats they face—spiking COVID cases and deaths coupled with the threat of violence from those radicalized on the platform.”

“Georgia poll workers and poll workers throughout the nation, many of whom are women and women of color, face two harrowing threats this election cycle: COVID-19 and violence from right-wing extremists,” said Bridget Todd, Communications Director of UltraViolet Action. “With Georgia’s runoff elections near, social media platforms like Facebook, who proudly tout their poll worker recruitment efforts, are simply not doing enough to protect these workers or stop the proliferation of harassment and violence against them. It is widely known that poll workers are facing harassment online, in person and over the phone. Our main concern is why Facebook isn’t taking as much initiative to protect poll workers as they were to recruit them.”