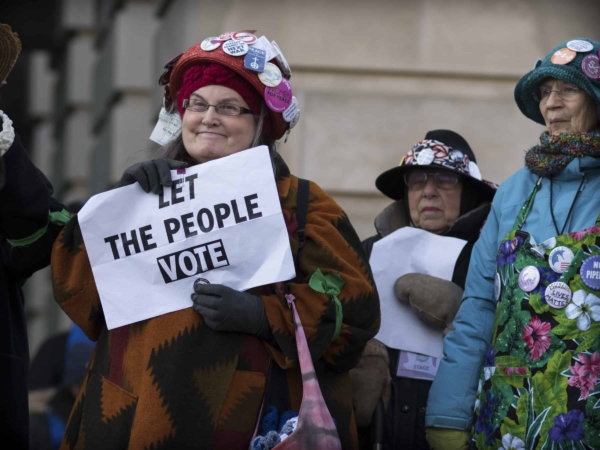 SCSJ: “The court’s ruling sends a strong message that
efforts to purge voters will not be tolerated in the Tar Heel state.”

Durham, N.C. (September 30, 2021) — In an editorial published this week, voting rights advocates from the League of Women Voters of North Carolina (LWVNC) and North Carolina A. Philip Randolph Institute (NCAPRI) praised a federal magistrate judge’s recent recommendation to dismiss a lawsuit brought by a national group seeking to purge voters in two of North Carolina’s largest counties. The Sept. 26 op-ed, penned by Melvin Montford, head of NCAPRI, and Marian Lewin, a spokesperson for the LWVNC, also encouraged other North Carolina counties to “vigorously defend themselves against these frivolous lawsuits.”

“Judicial Watch’s tactic of hurling distorted claims at multiple states in the hope something sticks is not just a waste of time and money; it risks eroding voter confidence and access,” said Montford and Lewin. “North Carolina’s 100 counties should continue to vigorously defend themselves against these frivolous lawsuits. Anything less would allow Judicial Watch and aligned groups to succeed in harming the very elections we’ve worked so hard to defend.”

Back in August, a magistrate judge from the U.S. District Court for the Western District of North Carolina recommended the dismissal of a lawsuit brought by national group Judicial Watch which would have purged eligible voters from the registration rolls in North Carolina.

Similar to Judicial Watch lawsuits filed in other states like Pennsylvania and Colorado, in the North Carolina case, Judicial Watch, Inc. v. North Carolina State Board of Elections, the right-wing organization claimed that Guilford and Mecklenburg counties had inflated voter rolls and argued for wide-ranging voter removals and other aggressive list maintenance tactics as a remedy.

Judicial Watch, which is funded primarily by large grants from conservative foundations, relied on misleading voter registration data in their case and, if successful, would have compelled under-resourced county boards of elections to remove eligible voters in violation of the National Voter Registration Act (NVRA).

The judge’s 22-page opinion rejected Judicial Watch’s arguments that high voter registration rates alone prove an NVRA violation, noting that the report relied upon by the plaintiff specifically advised that its data “be used with caution,” and warned against drawing conclusions about NVRA compliance based on registration rates “because of the long time period involved in removing ineligible voting records required by the NVRA.”

Earlier this year, Southern Coalition for Social Justice (SCSJ) and Dēmos filed a motion to intervene in the case on behalf of LWVNC and NCAPRI in order to defend voters against unjust and illegal barriers to voting. The court acknowledged the “compelling arguments to be allowed to intervene” presented by NC APRI and LWV NC, but declined to discuss the issue on the merits because the court recommended dismissing the case entirely.

In response to the court’s recommended dismissal, SCSJ’s Hilary Harris Klein, voting rights counsel also weighed in, stating: “We are grateful for the Court’s recommendation to halt yet another undemocratic attempt by partisan activists to remove eligible North Carolina voters from the voter rolls without due process. The court’s ruling sends a strong message that efforts like these to purge voters, including disproportionate numbers of Black and Latinx voters, will not be tolerated in the Tar Heel state. Should the District Court allow the case to move forward, we stand ready to make our case that these purges are just a bogus national attempt to thwart North Carolinians’ ability to register — and stay registered — to vote.”