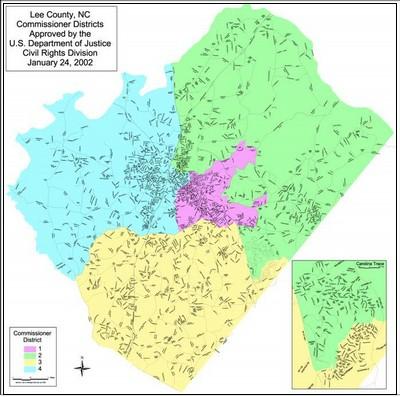 In a letter addressed to Lee County Attorney Whitney Parrish and the County’s seven sitting commissioners, attorneys with the North Carolina-based voting rights organization expressed their concerns that Commissioners’ proposed “Plan F” manipulates the county’s only Black voting district and would thereby undermine the ability for Black voters in Lee County to elect their candidates of choice.

For more than three decades, Lee County’s District 1 has provided opportunities for Black voters to elect candidates of their choice. But in proposing Plan F during the 2021 redistricting cycle, the Lee County Board of Commissioners is seeking to make significant modifications to District 1, the County’s only minority opportunity district, currently represented by Commissioner Robert Reives, the County’s only Black commissioner.

The Board of Commissioners has also faced criticism for its lack of transparency throughout the redistricting process. Commissioners failed to solicit public comment on Plan F’s dramatic changes to the county’s districts.

SCSJ Voting Rights Counsel Mitchell Brown, who co-authored the letter on behalf of a concerned Lee County resident, said in a statement that without changes, current plans for redistricting the county would harm Black voters.

“The residents of Lee County should choose their representatives in a fair and equitable way. For too long, elected officials in North Carolina have been choosing who they want to represent, whether on partisan or racial grounds,” wrote Brown. “In creating a separate map that has not been vetted by the public, the Board has allowed transparency to take a back seat and the Board is now seeking to choose the voters it wants to represent, flipping our democratic process on its head. Plan F harms Black voters by significantly diluting their voting power within District 1.”

The Lee County Commission is set to decide its redistricting plans during its regularly-scheduled meeting tonight, October 18, at 6 p.m. at Dennis Wicker Civic Center (1801 Nash St., Sanford, NC 27330). According to the meeting agenda, public comment will be offered prior to the vote.