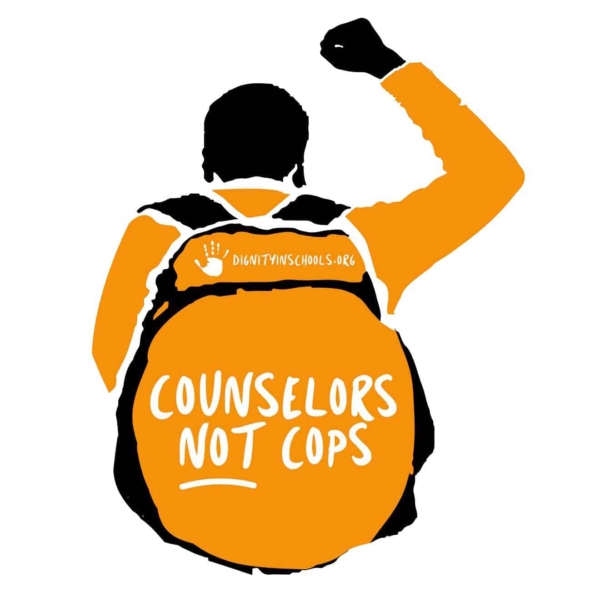 Raleigh, N.C. — The Wake County Black Student Coalition, the Education Justice Alliance, the Youth Justice Project of the Southern Coalition for Social Justice and the ACLU of North Carolina are launching a targeted campaign called #CounselorsNotCops to remove school resource officers (SROs) from the Wake County Public School System (WPSS). #CounselorsNotCops specifically calls for WCPSS to take the more than $1 million budgeted for school policing and allocate it towards Peacebuilders, trained counselors who will build positive relationships with students and parents and provide intervention support to teachers and administrators.

During the 2019-2020 school year, WCPSS had nearly 162,000 students in 191 schools, making it the 15th largest school system in the country. There are more than 70 SROs in the district, with at least one at every middle school and high school.

To kick-off the campaign, students and representatives of the advocacy organizations will present the Wake County Board of Education with a formal proposal, entitled “Building Peace in Wake County Schools,” at the school board meeting tonight.

“Following the brutal murder of George Floyd and Raleigh Police Department’s violent response to peaceful protestors, students and parents have renewed their demand for justice and police-free schools,” the proposal says. “The same officers terrorizing peaceful protestors are disproportionately targeting, arresting, and criminalizing Black and Brown students in WCPSS. WCPSS must follow the lead of courageous school boards throughout the country by removing police from schools and investing in alternatives to policing that create supportive and nurturing environments for all students.”

The “Building Peace in Wake County Schools” proposal calls for:

1. Removing all SROs from Wake County schools and ending all contracts between WCPSS and law enforcement agencies.

2. Investing the money currently spent on policing students, as well as additional funding, to implement a Peacebuilder Program. Students, parents and community members at each school would be involved in the hiring, training and assignment of paid Peacebuilders.

4. Assisting parents, students and community members with making adjustments to the Peacebuilder Program based on assessments of the program’s overall impact.

In addition to the requests in the “Building Peace in Wake County Schools” proposal, the Wake County Black Student Coalition is asking WCPSS to:

· Create a platform to give students of color, and specifically Black students, a greater voice.

· Create a safe and organized system for Wake County students to report sexual harassment of any kind.

· Integrate an in-depth study of Black history into the main curriculum.

The #CounselorsNotCops campaign is the latest in a series of efforts demanding an end to WCPSS’s discriminatory practices. In 2014, students and advocacy organizations filed a complaint with the Civil Rights Division of the U.S. Department of Justice highlighting years of discrimination and criminalization of Black students for minor, age-appropriate behavior and of students with disabilities for actions associated with those disabilities. In 2018, WCPSS entered into a voluntary agreement with the Office of Civil Rights agreeing to revise its discipline policies and reduce unnecessary referrals to law enforcement. However, two years later, WCPSS continues to criminalize Black students at an alarmingly high rate.

Research shows Black students do not misbehave at higher rates than their White peers. However, Black students accounted for 73% of school-related entries into the youth justice system in Wake County during the 2018-19 academic year while only making up 22% of students. After being arrested by SROs, students face a myriad of collateral consequences that harm their future including the loss of instructional time and course credits, legal costs and court fees, separation from families, emotional and physical trauma and potential loss of housing assistance and employment.

The Wake County Black Student Coalition works to unite all Wake County students to help end systemic racism and the oppression of Black people by educating our community and the surrounding communities as a whole. Follow them on Twitter and Instagram.

The Education Justice Alliance (EJA) is a group of concerned individuals in Wake County working for a reduction in the number of public school students pushed off the academic track through unfair suspensions, harsh discipline policies, academic failure and school policing. For more information, visit their website at eja-nc.com and their Facebook page.

Since 1965, the ACLU of North Carolina has been the state’s guardian of liberty – working in courts, the General Assembly and communities to protect and advance civil rights and civil liberties for all North Carolinians. A nonprofit, nonpartisan organization with more than 30,000 members and supporters across the state, the ACLU of North Carolina is a state affiliate of the national American Civil Liberties Union. For more information, including event details, please visit  acluofnorthcarolina.org.