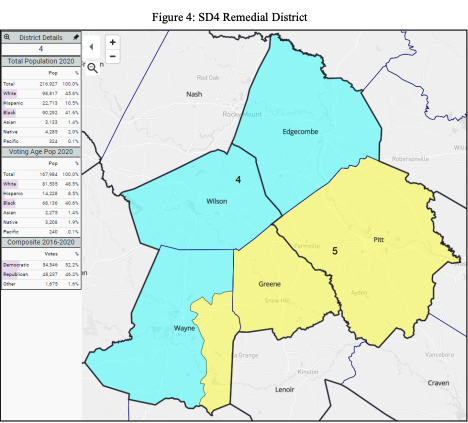 Raleigh, N.C. (Feb. 21, 2022) — In a court filing Monday, Southern Coalition for Social Justice, on behalf of plaintiff Common Cause, detailed the latest unconstitutional redistricting proposal from the North Carolina General Assembly, which dilutes the voting power of Black voters and relies on misleading data to cover up their extreme partisan gerrymander.

Common Cause’s February 18 submission to the Wake County Superior Court details how legislative maps can protect Black voters’ ability to elect candidates of their choice by drawing a new House District 10, centered in Wayne County, and a new Senate District 4, which encompasses Edgecombe, Wilson, and most of Wayne counties.

“The North Carolina Supreme Court’s February 14 opinion was a historic victory for Black North Carolinians, who were most harmed by the legislature’s extreme partisan gerrymandering,” said Hilary Harris Klein, Senior Voting Rights Counsel with South Coalition for Social Justice. “We will safeguard that momentous decision by holding the Legislature accountable to their responsibility to protect North Carolinians’ basic rights.”

The General Assembly’s proposed maps also rely on misleading and skewed data, contradicting clear guidelines from the Court for analyzing partisan bias. Their metrics, previously discredited during a January trial, only serve to cover up persistent efforts to manipulate maps entrenching their own power. The Legislature not only relied on faulty data, but did so through a secretive process shutting out public comment, failing to come to a bipartisan agreement, and hiding the source of “outside legal counsel.”

“Instead of following the NC Supreme Court’s clear ruling, Republican legislative leaders chose to craft districts that continue to be illegally gerrymandered for their own self-interests at the expense of free elections,” said Bob Phillips, Executive Director of Common Cause NC. “We’re asking the court to correct the legislature’s failure to comply with the North Carolina Constitution. Our state’s voting districts don’t belong to politicians, they belong to the people. We must have maps that respect the rights of all North Carolinians.”

The Wake County Superior Court’s three-judge panel, alongside three appointed Special Masters, has until noon on Wednesday, February 23 to approve new state legislative and Congressional voting maps. Parties have until 5pm on February 23 to appeal the trial court’s decision to the North Carolina Supreme Court. Candidate filing for the May 17 primary election is currently slated to begin at 8am on Thursday, February 24.