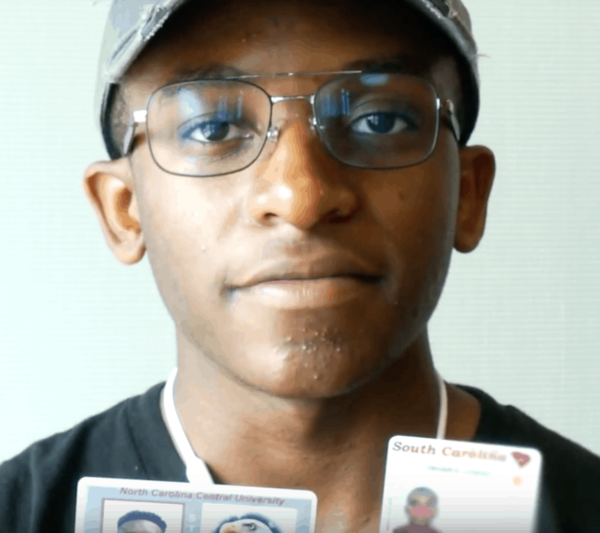 Jaden Peay is a sophomore at North Carolina Central University. Jaden chose to major in political science because he’s passionate about voting and participating in the political system. Jaden wants to go to law school, eventually become a judge, and work to make the criminal justice system more equitable for everyone. Jaden grew up in South Carolina and still has a South Carolina driver’s license, as well as an NCCU student identification card with his picture. When Jaden first stepped onto campus in 2017 and began to appreciate the extent to which politicians were trying to silence voters’ voices, a fire ignited inside him. Jaden started volunteering to register other students to vote. Jaden is passionate about encouraging voting because he believes it gives his community the power to change policy and hold our representatives accountable.

Last year, as a freshman, Jaden voted in Durham for the first time with no problem. However, if the Voter ID Amendment passes, he may not have that same experience in the future. Under previous North Carolina voter ID requirements, Jaden’s South Carolina driver’s license and NCCU student ID would not have been acceptable. In fact, in March 2016, when a voter ID requirement was in place, many college students in his same situation were disenfranchised. Although Jaden lives in Durham, voted last year, and volunteers to register other students to vote, the Voter ID Amendment, if it passes, could put his right to vote in jeopardy.

Over 72,000 out-of-state students attending universities in this state may, like Jaden, lack North Carolina driver’s licenses and could be denied their fundamental right to vote if the Voter ID Amendment is approved in November, giving the legislature a blank check to enact a restrictive photo ID requirement for voting.