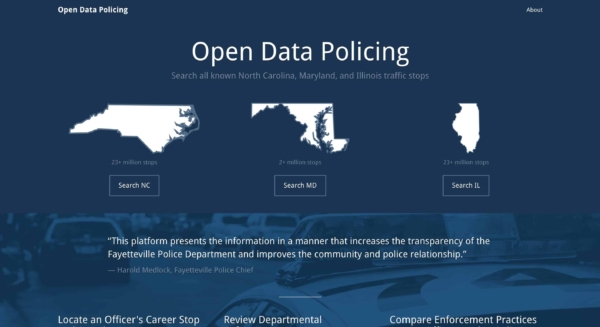 Open Data Policing is a first-of-its-kind platform that aims to make real the recommendation of the President’s Task Force on 21st Century Policing to make stop, search, and use-of-force “data…publicly available to ensure transparency.” The site currently aggregates, visualizes, and publishes public records related to all known traffic stops to have occurred in North Carolina since 2002, in Illinois since 2005, and in Maryland since 2013. Data is collected in all states pursuant to mandatory data collection statutes and reported monthly to the North Carolina State Bureau of Investigation, Illinois State Police, and Maryland State Police. The platform does not alter or manipulate raw data. Where data sets are incomplete or missing, it is because they have not been reported to the state agency from which the site derives its records. Although the site permits users to identify the career enforcement patterns of individual officers associated with known traffic stops, Open Data Policing does not have access to, nor does it publish, the names of drivers, passengers, or officers involved in traffic stops.