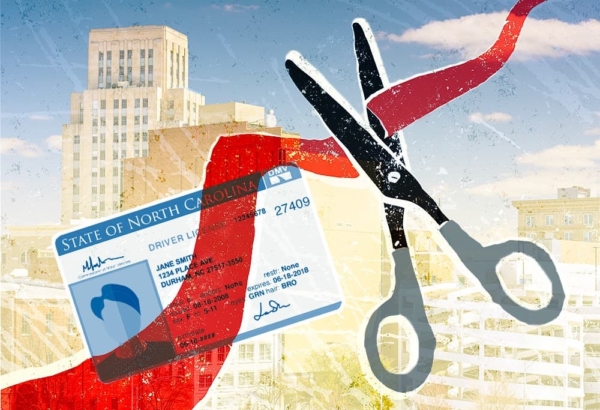 RALEIGH, N.C. –The North Carolina Division of Motor Vehicles (DMV) has revoked the licenses of hundreds of thousands of people simply because they cannot afford to pay traffic fines and court costs. The Southern Poverty Law Center (SPLC), the American Civil Liberties Union (ACLU), the ACLU of North Carolina and the Southern Coalition for Social Justice are suing to end the practice, which funnels low-income people further into poverty, in violation of their  due process and equal protection rights under the 14th Amendment to the U.S. Constitution.

The North Carolinians impacted by this punitive scheme are stripped of their ability to support themselves and their families, as drivers’ licenses are crucial to securing and maintaining employment, driving children to school, and obtaining basic needs. The federal lawsuit challenges the DMV’s automatic revocation of driver’s licenses without providing proper notice and hearings to ensure that people who cannot afford fines and costs will not lose their license.

“No one should have to live with the burden of their license being revoked, and all the expenses that come with that, simply because they don’t have any money,” Plaintiff Seti Johnson said. “I’d previously fallen behind on my rent and sacrificed the needs of my children just to keep my license. I cannot afford to do that again. This has to stop.”

The DMV’s unlawful license revocation stems from a North Carolina statute that requires the automatic revocation of licenses for nonpayment of a traffic ticket 40 days after a court judgment.  But the law does not require a hearing before revocation to ensure that a person punished under the statute is actually able to pay. U.S. Supreme Court precedent makes it clear that inability to pay must be considered before punishing a person for nonpayment of a court fine.

“I just want a fair chance to take care of my family,” Plaintiff Sharee Smoot added.  “I can’t afford to pay the tickets right now, but that shouldn’t prevent me from having a driver’s license.”

Sam Brooke, deputy legal director for the SPLC, said: “The North Carolina Division of Motor Vehicles unconstitutionally punishes people by taking away their driver’s licenses simply because they cannot afford to pay their traffic tickets, without due process or any regard for their ability to pay. It’s predatory and puts thousands of individuals with low incomes at risk. A license permits physical mobility and enables economic transcendence. Taking licenses away from those most in need is not just illegal, it is also counterproductive and heartless. We are suing to end this unjust practice.”

More than 15 percent of North Carolina residents live in poverty. North Carolina’s practice of revoking licenses for nonpayment without ensuring ability to pay disproportionately harms people of color due to longstanding racial and ethnic gaps in poverty and wealth.

“North Carolina’s unjust traffic fine collection scheme has created a two-tiered system of justice where people charged with the same traffic offense are punished differently based on how much money they have,” said Cristina Becker, criminal justice debt fellow for the ACLU of North Carolina. “Those who can afford to pay their traffic tickets get to keep their license, while those who cannot have their license revoked, making it harder to find and keep a job and take care of their families. North Carolina is denying a basic necessity – having a driver’s license – to hundreds of thousands of residents simply because of their economic standing, trapping countless people in a cycle of poverty. This unfair and unconstitutional system must end.”

Laura Holland, criminal justice attorney with the Southern Coalition for Social Justice, said: “The consequences of losing a driver’s license can be devastating for low-income families in North Carolina. People facing fines for a traffic offense, with low or no income, are often forced to choose between paying fines to prevent their licenses from being revoked or using that money for food, housing and health care. When a person whose license is revoked cannot afford to pay, they are faced with a choice between losing their jobs because they no longer have a license to drive to work, or driving with a revoked license and risking further penalties.”

When the DMV receives notice that a person has not paid a traffic fine or cost, it enters a license revocation order that becomes effective 60 days after mailing or personal delivery to the motorist. The notice does not explain that, if a motorist cannot pay, they can petition for a hearing to keep their license. The notice indicates that the only way to restore a revoked license is to pay all outstanding traffic fines and court costs in full.

Johnson, a Black father of three, had to choose between paying traffic fines and supporting his children. After a routine traffic stop last summer in Cabarrus County, he was surprised to learn that his license had been revoked for unpaid traffic tickets. He was forced to use his rent money to pay off the more than $700 he owed to reinstate his license.

Johnson’s license was reinstated, but not before he received a separate traffic ticket for driving with a revoked license. The charge was later reduced, and the court ordered him to pay a $100 fine and $208 in court costs. He was able to pay $100, but couldn’t pay more, and was assessed an additional $20 fee because he couldn’t pay in full that day. Without a job, he struggled to pay the remaining amount. The fees were due on May 22, and Johnson fears that he will lose his license again.

Smoot is a single Black mother struggling to support her daughter on a low income. She lost her driver’s license in 2016 when she could not afford to pay a traffic fine. Every day, she faces an impossible choice between driving illegally to work and losing her job.

The plaintiffs seek a court order declaring that North Carolina’s law and the DMV’s practice of revoking driver’s licenses are unconstitutional. The plaintiffs also seek an injunction to prevent the DMV from revoking licenses for nonpayment without first providing hearings to determine whether motorists willfully did not pay. They also seek to prevent the DMV from revoking licenses without sufficient notice of options other than payment, to prevent those who cannot afford to pay from having their licenses revoked. The suit also requests an injunction that would require the DMV to restore any licenses that were revoked solely for nonpayment.

To read the official filing, click on the following link: https://southerncoalition.org/wp-content/uploads/2018/05/nc_drivers_license_complaint.pdf