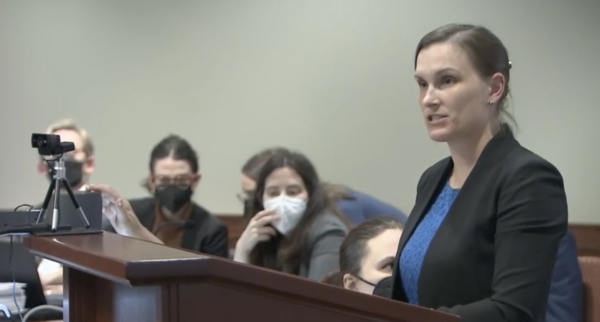 The attorney for the Harper plaintiffs, Elisabeth Theodore, spoke first. She called attention to the fact that even the legislative defendants’ experts admitted, on the stand, the enacted maps are “pro-Republican, partisan outliers.” “Not a single expert witness took the stand to try to convince you that the 2021 plan isn’t an extreme partisan gerrymander,” said Theodore, “and that silence speaks volumes.”

Theodore closed by reminding the court that most of the state’s top lawmakers invoked legislative privilege to avoid giving testimony, a startling fact in light of Rep. Hall’s admission that he used outside sources to craft his maps and then lied to Democratic colleagues. “That’s what you heard from a legislator who didn’t invoke privilege,” said Theodore, signaling that Hall’s admission was merely the tip of the iceberg.

Attorney Zachary Schauf, representing the North Carolina League of Conservation Voters plaintiffs, made the case that without court intervention, the legislature’s “extreme partisan gerrymanders” would “render most elections mere formalities, as is confirmed by every expert in this case.”

Schauf closed by defending the alternative maps provided by NCLCV against claims that the maps were Democratic gerrymanders. Schauf said that the legislature’s own expert, Dr. Michael Barber, “admitted that if you were optimizing for Democratic gain, you would not draw the NCLCV maps.”

“It is cynical and pernicious to claim colorblindness because no person could ‘un-know’ the substantial racial and partisan data the legislators already have,” said Klein. “Despite utilizing a process that disclaimed any consideration of race, enacted plans consistently targeted and destroyed effective cross-over districts that gave Black voters the ability to elect candidates of their choice.”

Klein also hammered legislative claims regarding the transparency and openness of this year’s legislative map-making process, walking the court through Rep. Hall’s failure to disclose the use of outside assistance when drawing House maps.

“The persistent hiding, gamesmanship, and semantics leave us still [wondering] who actually had the experience to draw such effective gerrymanders,” said Klein. “What we do know is enough to support an inference of nefarious intent by Legislative Defendants.”

The lead attorney for GOP lawmakers Phillip Strach closed the trial by doubling down on Rep. Hall’s testimony that North Carolina’s 2021 redistricting cycle was  “the most transparent redistricting process in history.” Strach told the judges they should reject “irrelevant” evidence from what he called a “Justice League” of mathematical and political science experts who used trillions of comparison districts to universally find the districts drawn by the legislature’s Republican chairs to be “extreme partisan outliers.”

The three-judge panel’s ruling on the legality of the maps is expected by Tuesday, Jan. 11.