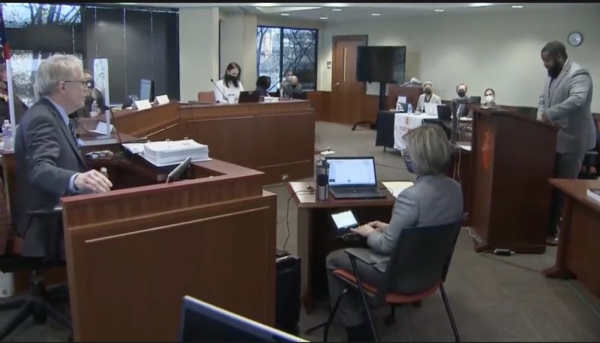 Day two of the trial opened with more cross-examination of plaintiffs’ expert witness Dr. Wesley Pegden, Professor of Mathematics at Carnegie Mellon University, who testified Monday that North Carolina’s enacted map “is more optimized for partisanship than 99.999% of all possible maps.” Dr. Pegden defended his analysis Tuesday during a heated exchange with the legislature’s attorney, saying that while he did not review the full legislative record for his analysis, his algorithm captured the results of the actual enacted map to show lawmakers “carefully crafted [the map] to optimize partisanship,” based on “the [criteria] constraints announced before the map-making started, not the justifications after.”

Dr. James Leloudis, History Professor at the University of North Carolina at Chapel Hill, followed with an overview of his report on North Carolina lawmakers’ historical backlash ” to Black political gains” which resulted in “profoundly detrimental effects on Black North Carolinians’…equal opportunity[to] elect the candidates of their choice.”

Leloudis placed 2021 maps among a growing list of anti-Black, anti-voter measures passed by lawmakers over the last decade. “All…have been judged by the courts as violations of minority voters’ constitutional rights…all have appeared race-neutral on their face,” said Leloudis. “The legislature that engaged in partisan gerrymandering in 2011, also crafted this redistricting plan….these are cut from the same cloth and crafted by the same tailors.”

Of lawmaker’s enacted plan, Leloudis closed by saying, “from a historical perspective…this current plan is unlikely to advance multi-racial coalitions and may well undermine them.”

Tyler Daye, an NC-based redistricting organizer with Common Cause NC, who monitored much of the redistricting process at the North Carolina General Assembly, told the court he found the weeks-long process  “overwhelming” and “difficult to tell who was drawing the maps.”

After Christopher Ketchie, a GIS expert with Southern Coalition for Social Justice, spoke briefly on the stark changes in the voter demographics between the districts in the 2019 maps and those in the current maps, plaintiffs called Dr. Daniel Magleby, a professor at SUNY Binghamton, who conducted research on enacted maps and found them to be “significantly biased against Democratic voters.”

According to Magleby’s analysis, lawmakers’ 2021 maps “represent statistical outliers” — no simulated plan out of 1000 showed as extreme a partisan disadvantage as the legislature’s enacted plan. “What is problematic [about] maps produced by the legislature [is] they remove the possibility of [the] politics of voters to overcome the politics of the mapmakers,” said Magleby. “While the process may be political, there is NO process that could unravel the state of bias in the state of [North Carolina].

The plaintiffs’ final expert witness, Tufts University mathematician Moon Duchin, looked at enacted maps through the lens of partisan fairness and racial vote dilution to find the enacted maps “exhibit and entrench partisan skew” and “dilute racial opportunity to elect candidates of choice.” Looking at trends in 52 statewide North Carolina general elections, Duchin observed that despite the state’s notoriously close elections, North Carolina’s current maps do not make close elections possible. “Close votes should give you close seats…When a map is designed to thwart that, we shouldn’t accept it,” said Duchin.

The day ended with the first witness for the Defendant Lawmakers, Dr. Andrew Taylor, a Political Science Professor at N.C. State University, who opened his analysis of the 2021 redistricting process by calling the process “transparent” —but only in comparison to the Legislature’s process in past decades and their “other business.” On cross-examination, Taylor says it may take “judicial intervention” to curb the “significant discretion” lawmakers have to gerrymander districts.

SCSJ will live-tweet the trial on Twitter at @scsj using the hashtag #ncredistrictingtrial and continue to promote WRAL’s live video feed at scsj.org/ncmapstrial.