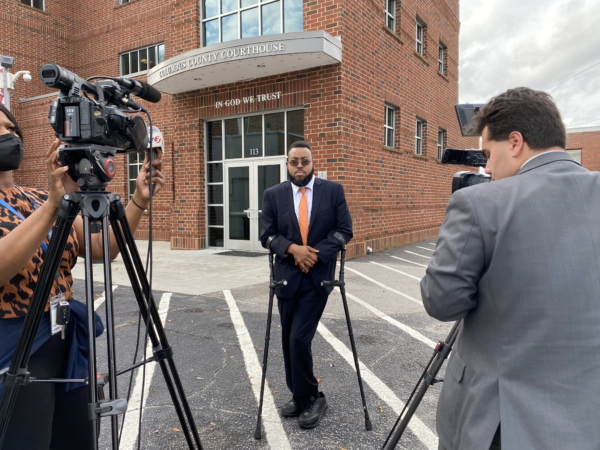 WHITEVILLE, NC — Jody Greene, the Columbus County Sheriff embroiled in legal trouble over racist remarks and behavior while in office, resigned for a second time Wednesday while in court before the district attorney could make his case to remove him permanently from office.

Greene’s resignation prompted Judge Douglas Sasser to render moot District Attorney Jon David’s petition to have him removed from office, but he declined to rule on the part of the petition that would have disqualified Greene from ever holding that office again.

If Sasser dismisses that motion for disqualification, David said at a press conference the judge made clear his office could re-file it if Greene ever worked in any capacity at the Sheriff’s Office again.

“We simply do not feel as though Jody Greene should be someone who ever carries a badge again,” David said.

The implication, however, of Greene resigning for a second time on the day of a public hearing meant to address his alleged misconduct is that he could run for office again and or be hired again as a law enforcement officer.

“This is another example of Jody Greene trying to game the system to avoid the full consequence of his abhorrent behavior. This is what necessitated the petition we helped file with the Board of Elections challenging his eligibility for office,” said Jeff Loperfido, interim Chief Counsel of Voting Rights at SCSJ. “We hope the legal process continues to play out so that Jody Greene is finally stopped from having any involvement in Columbus County law enforcement.”

SCSJ represented Herman Lewis, second Vice President of the Columbus County NAACP, who filed a protest after Greene’s election asking the County Board of Elections to prevent Greene from taking his elected office because he had already been disqualified under the North Carolina Constitution. The County Board denied the protest and Lewis appealed to the State Board of Elections, which also denied it, stating that the matter was best addressed in front of the local court.

David said Greene remains under criminal investigation by the State Bureau of Investigation.

The Columbus County Board of Commissioners on Thursday appointed Bill Rogers as sheriff to fill the remainder of the four-year term.

Curtis Hill, President of the Columbus County NAACP, said he was disappointed after Wednesday’s court hearing that Greene wasn’t disqualified from office.

“We were thinking we were going to have an opportunity to actually hear what the prosecutor has put in his petition to remove Jody Greene, which we thought was really important for the citizens of Columbus County,” Hill said. “Nothing they did today will prevent him from serving in law enforcement again, and that is very troubling to me and for the citizens of Columbus County.”

He said the NAACP will continue to work to make sure residents are safe and fight for their day in court when it comes to the corruption in the Sheriff’s Office.

“We are wanting to make sure everybody feels safe every day,” he added. “We want to make sure when we see a Sheriff’s deputy in Columbus County that they are protecting and serving the community we live in.”

Hill was optimistic about Rogers’ appointment. He spoke at the Commissioner’s meeting about the need for a citizen review council in Columbus County to rebuild trust between law enforcement and the community.

“The NAACP looks forward to working with Sheriff Rogers and building the trust of our community with him,” Hill said. “It takes a community and partners working with law enforcement for the transformative work to happen.”

Courtney Patterson, third Vice President of the NC NAACP, said they continue to support Hill and the residents of Columbus County. He was also present Wednesday and shared Hill’s disappointment in Greene’s second resignation. “Columbus County residents deserve more than watching and waiting and worrying about Jody Greene serving in law enforcement again,” he said on behalf of the NC NAACP. “They deserve to have faith in their elected leaders and to feel safe in their homes, and we will continue to work to make sure that happens.”