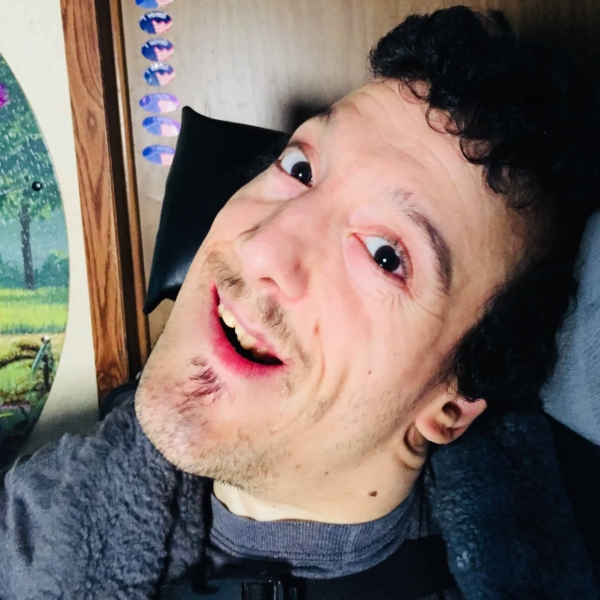 Jabari Holmes is 42 years old and lives in Wendell, North Carolina. He was born with severe cerebral palsy that has confined him to a wheelchair. He lives with his 82-year-old father and 69-year-old mother. Jabari’s medical condition requires full-time care, prevents him from driving, and makes it difficult for him to travel at all. Because of his medical condition, Jabari is non-verbal, but he uses a communication board, voice activator and an eye gaze computer to communicate with his family and the world. He is able to write out sentences using that technology. Jabari has voted in person in every election but one since he turned 18, despite the challenges involved in doing so. Jabari insists on going into the polling place to vote because this act confirms to him that he is an important part of society and makes him feel like he’s part of his community. After North Carolina enacted a voter ID law in 2013, Jabari’s mother Elizabeth tried very hard to get him a photo ID from the DMV, but she was unsuccessful because she does not have a copy of his social security card. Despite the demands of caring for Jabari, she spent a significant amount of time trying to get a copy of his social security card so that he could get a DMV-issued non-operator’s license, but she was not able to do so. Elizabeth helps Jabari get to the polling place every election, but sadly she hasn’t been able to help Jabari get a photo ID.

Jabari has two great passions in life: politics and UNC basketball. His walls at home are covered with UNC memorabilia, and he watches the news daily to stay informed on political issues. Jabari is a passionate, eligible and regular voter who, because he does not have a photo ID, could be disenfranchised if the constitutional amendment requiring photo ID is approved in November.

According to census data, as many as 122,000 North Carolinians may have disabilities that prevent them from driving, meaning they may lack a driver’s license or other photo ID just like Jabari. Those citizens could be denied their fundamental right to vote if the Voter ID Amendment is approved in November, giving the legislature a blank check to enact a restrictive photo ID requirement for voting.