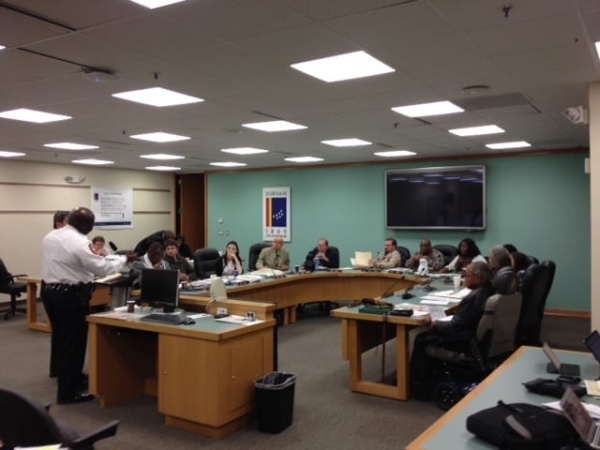 On Tuesday night, the Durham Human Relations Commission held its fourth in a series of special hearings to investigate allegations of racial profiling and selective enforcement by the Durham Police Department.  For the second month in a row, Durham Police Chief Lopez and his Deputy Chiefs had the floor for the entire evening. They used their time to present the commission with an array of information, detailing arrest stats, suspect descriptions, and departmental hiring practices—much of it entirely irrelevant to the issues that prompted the Mayor to call for the hearings to begin with. What was more notable is what the police again did not address—namely, the shocking racial disparities in traffic and drug enforcement statistics that have been highlighted in recent months by the FADE Coalition, a community group of which SCSJ has been a part.  On October 17, 2013, FADE Coalition issued a letter to the commission that drew attention to these highly racialized outcomes and made a series of policy recommendations aimed at reducing racial disparities in traffic and drug enforcement.  The department responded to FADE’s 8-page letter with a rambling 82-page report that failed to substantively address most of the issues raised by the coalition and largely sought to undermine the credibility of the data collection statute itself.  FADE, in turn, sought but was denied an opportunity to respond publicly to the department’s report at the fourth special hearing on profiling.
As a result of Chairman Ricky Hart’s decision to close the meeting to public comment, FADE Coalition issued a rebuttal of its ownto the department in the hours preceding Tuesday’s hearing.  The public letter, which was distributed to the Mayor, City Manager, City Council, HRC, and the media, also took the commission to task for failing to give adequate time to community members whose concerns had prompted the Mayor to call for the hearings in the first place.  To his credit, Mr. Hart appeared to take these concerns to heart.   At the conclusion of the department’s presentation, the Chairman called representatives of FADE, SCSJ, and the Durham NAACP to the podium and informed them that each group would be given two hours to present their perspective at the fifth, sixth, and seventh hearings, to be held on successive Tuesdays starting in January.
SCSJ will make good use of its time and will continue its work with our community partners to shine a light on the department’s unacceptable enforcement strategies, which unfairly burden communities of color and have resulted in the unwarranted search and seizure of thousands of innocent black motorists on Durham streets.  Stay tuned.